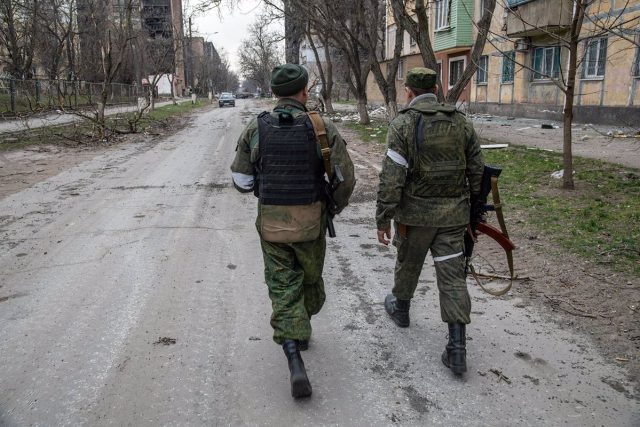 Authorities in the self-proclaimed Donetsk People’s Republic on Friday raised to more than 50 the death toll from an attack blamed on the Ukrainian Army that hit a prison in the town of Yelenovka, although the Ukrainian Armed Forces have denied carrying out an attack on the area and have pointed to Russian forces as responsible.

“In Yelenovka, 53 people have died and 75 others have been wounded,” the Territorial Defense Center of the Donetsk People’s Republic has said through a message on its Telegram account. Thus, it has detailed that the prison was hosting “Ukrainian prisoners of war”.

He also pointed out that the attack was allegedly carried out with a HIMARS — a multiple launch rocket system — and stressed that “the criminal regime in Kiev deliberately destroys Ukrainian militiamen who have surrendered in order to hide the traces of war crimes committed against the civilian population of the Donbas.”

The agency has stressed that the Ukrainian authorities “force the rest to continue hostilities and not to surrender to the troops of the Donetsk People’s Republic.” In this line, the leader of the self-proclaimed republic, Denis Pushilin, has assured that in the facilities there were more than 190 prisoners and has denied that among them there were foreign citizens, according to the Russian news agency Interfax.

However, the General Staff of the Ukrainian Army has stressed in a statement on its account on the social network Facebook that “the Armed Forces of Ukraine have not launched missile and artillery strikes against the Yelenovka settlement” and added that Ukrainian troops “carry out extremely accurate shelling only against Russian military targets.”

“The Armed Forces of Ukraine fully comply with the principles and respect the norms of humanitarian law and have never carried out and are never carrying out attacks against civilian infrastructure, especially in places where fellow countrymen prisoners of war could be held,” he has said, while accusing Russia of “continuing its propaganda methods and information warfare to hide its treacherous actions.”

“Claims about an alleged attack on civilian infrastructure and citizens by the Armed Forces of Ukraine are a clear lie and provocation. The responsibility lies with Russia, the aggressor, occupying and terrorism-promoting country,” he has argued, before pointing to a “targeted shelling” by Russia against the prison in Donetsk.

In this way, he explained that “the Russian occupiers maintain their criminal objectives of accusing Ukraine of war crimes and concealing the torture and execution of prisoners carried out there on the orders of the occupation administration and the command of the Armed Forces of Russia on the temporarily occupied territory in the Donetsk region.”

In this vein, Ukrainian Foreign Minister Dimitro Kuleba said on his account on the social network Twitter that “Russia has committed another horrible war crime by attacking a correctional facility in the occupied town of Yelenovka, where it held Ukrainian prisoners of war.”

“I call on all partners to strongly condemn this brutal violation of humanitarian law and recognize Russia as a terrorist state,” he has maintained, a line similar to that shown by Ukrainian presidential adviser Mikhail Podoliak, who has pointed out that “Russian troops have carried out a carefully planned attack” and that “there are no operational military targets for the Ukrainian Army” in this locality.

From the Russian side, the deputy head of the Military Administration of the Donetsk People’s Republic, Eduard Basurin, has also branded the event as “a war crime” but, according to him, perpetrated by Ukraine, whom he has accused of “killing its own citizens.”

Russia’s Investigative Committee has already opened a criminal investigation into the incident, according to information from the Russian news agency TASS.

Podoliak has defended that Ukrainian forces “have all the tools for an accurate identification of the objects to be destroyed” and has argued that “the scale and speed of the information campaign of Russian propagandists indicate that it was a planned and organized action.” “We know that some of those captured were moved to the facility a few days before the crime,” he has said.

“This is a classic, cynical and elaborate false flag operation,” he has noted, before accusing Russian forces of “concealing evidence of the scale of Russian war crimes and torture,” “affecting agreements for the exchange (of prisoners),” and “discrediting the Armed Forces of Ukraine.”

“Russia’s hysterical preemptive statements that the strike was carried out against captured Ukrainian defenders seek to create a resonance in Ukraine and turn the population of various countries against our Armed Forces,” said Podoliak, who assured that “the real identities of the dead will be determined by the Ukrainian Intelligence services.”

Finally, he stressed that “the Russians have deliberately, cynically and en masse killed captured Ukrainian citizens, which will be investigated by the Prosecutor’s Office and international teams.” “It is obvious that, in the face of approaching tactical defeats, Russia will resort to cannibalistic provocations to promote them on global markets”, he pointed out, before calling for a “firm response” from the United Nations so that “Russia is excluded from all international institutions”.

On the other hand, the head of the Donetsk Regional Military Administration, Pavlo Kirilenko, has pointed out that during Thursday eight civilians were killed by Russian forces attacks. Thus, he noted on his Telegram account that three people died in Bajmut, two in Toretsk, and one each in Orlivka, Hirnik and Soledar.

“Another 19 people were injured. At the moment it is impossible to fix the exact number of victims in Mariupol and Volnovaja,” he stressed. “All Russians will be held accountable for their crimes on our land,” Kirilenko concluded.

The war in Ukraine broke out on February 24 following the invasion order signed by Russian President Vladimir Putin, who days earlier had recognized the independence of the self-proclaimed republics of Donetsk and Lugansk (east), the scene of an armed conflict since 2014.