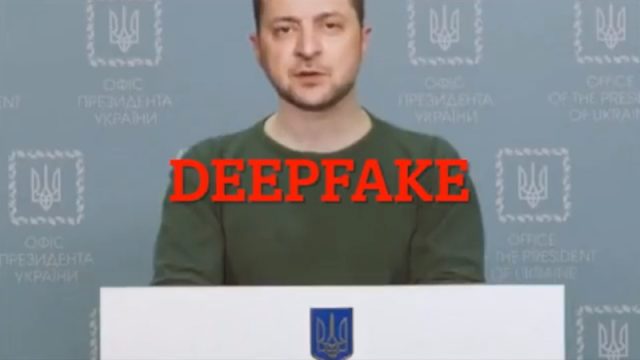 Distributed on social media platforms, a version altered by deepfake technology of a speech in which President Volodymyr Zelenskyy seems to ask Ukrainian soldiers to lay down their arms and surrender to Russian forces rather aroused the amusement of the online community, which immediately noticed the fake. a rude way.

Deepfake technology can be a formidable weapon in propaganda and misinformation campaigns, but the Russians do not know very well how to use it, the clip propagated on social networks being identified and promptly removed. Labeled by President Zelenskyy himself as a “childish challenge”, the video soon received a tailor-made response, in the form of a video message denouncing the rude fake and calling on Russian soldiers to lay down their arms.

In a statement on Twitter, Nathaniel Gleicher, head of security policy at Meta, the parent company behind Facebook, said the video violated the company’s “misleading media distribution” policies.

3 / A deepfake’d @ZelenskyyUa calls on soldiers of #Ukraine to lay down their arms.#Zelenskyybeing a quick guy, already has a video mocking it.

He suggests instead that #Russian soldiers lay down * their * arms.pic.twitter.com/fjCNAO5l17

The deepfake video was released just as Ukraine 24 was being hacked during a March 16 national broadcast, according to The Atlantic Council’s Digital Forensic Research Lab. The hackers modified the test posted on the station’s news bar to urge Ukrainians to give up their weapons.

Michael Meyers - September 29, 2022 0
Constantine 2 will take shape with Warner Bros. help, and Keanu Reeves will reportedly be reprising his role as John Constantine. It's suspected to be...