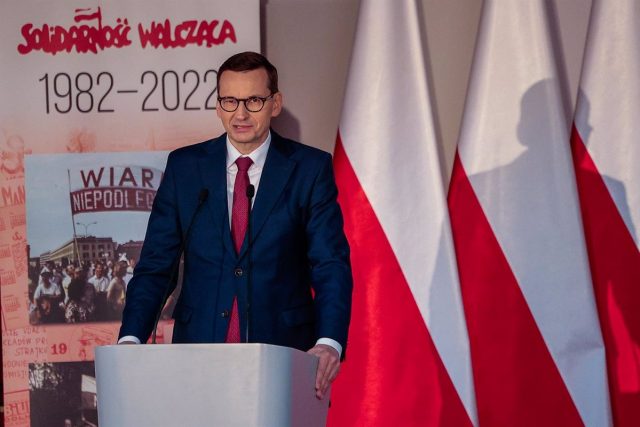 The Prime Minister of Poland, Mateusz Morawiecki, has criticized on Wednesday the “imperialism” of the European Union, for which he has called for profound reforms regarding its treatment of some of its member states, especially the smaller ones.

“The war in Ukraine also revealed the truth about Europe. We are faced with a formal democracy and a de facto oligarchy ruled by the strongest,” Morawiecki has written in the German daily ‘Die Welt’, in which he has criticized that Germany and France have more power than the rest of the member states.

“Moreover, the strong make mistakes and are not able to accept criticism from outside,” said the Polish prime minister, who demanded a “profound reform that puts the common good and equality back at the forefront of the principles of the union.”

“It is the member states and not the EU institutions that must decide what direction and priorities to take,” Morawiecki emphasized, who accused the union of exercising a kind of “imperialism”, which, like the Russian one, must be “fought”.

“Europe must put imperialist Russia in its place,” Morawiecki has claimed, for whom the war in Ukraine has exposed those who did not want to recognize “the imperialist tendencies” of Russian President Vladimir Putin. “Now they must face the demons of the 19th and 20th centuries: nationalism, colonialism and totalitarianism.”

Morawiecki’s ultra-conservative Law and Justice (PiS) government has clashed with Brussels on numerous occasions over various issues, including the latest judicial reform and its media law, both of which, according to the European Commission, would jeopardize the rule of law in Poland.

Prior to this article signed by Morawiecki, the leader of his party Jaroslaw Kaczynski, warned in an interview for a Polish media that in case they were victorious in the parliamentary elections scheduled for this year, Poland’s relationship with the EU would have to be restructured.

Statements to which the former Prime Minister of Poland and former President of the European Council, Donald Tusk, asked to pay attention because they are nothing more than a “constant” and typical of a “maniac” way of maneuvering to get Poland out of Europe.