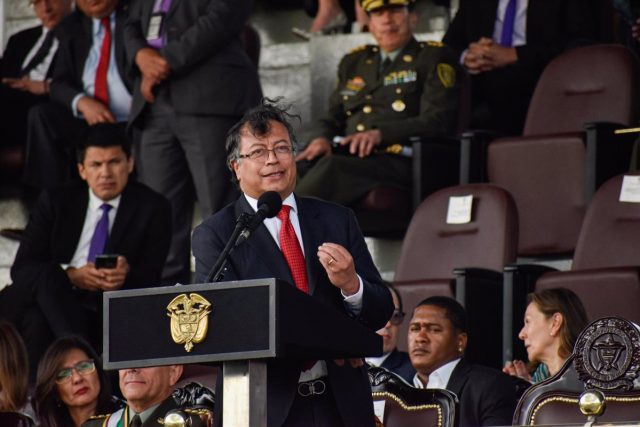 “No more violence,” Petro has said after attack

The Presidency of Colombia has reported that a security retinue of the president, Gustavo Petro, has been assaulted this Wednesday by a group of armed people as they passed through the municipality of El Tarra, in the department of Norte de Santander.

A caravan formed by three vehicles, none of which included President Petro, was circulating along a road in the San Pablo sector while carrying out reconnaissance work when it was machine-gunned as they approached an illegal checkpoint formed by six people.

The vehicles disregarded the signals to stop given to them from this improvised checkpoint, so they were shot at “with long-range firearms,” according to the Presidential communiqué.

Read:  Biden and Xi will speak this Friday about the war in Ukraine

“One of the vehicles did not make it through the checkpoint and another was punctured. Two vehicles and a driver of the National Protection Unit (UNP) were detained there, who was later released,” the communiqué continues.

The authorities have denied that there are any missing persons and reported that the event has ended without injuries or fatalities. Although, for the moment, the dissidents of the disappeared FARC guerrillas have not made any statement about the incident, several Colombian media have attributed this action to them.

It should be remembered that in this area there is presence of both the National Liberation Army (ELN) and the dissidences, as the two groups dispute the territory due to its proximity to the Venezuelan border, as reported by the newspaper ‘El Colombiano’.

Said retinue was carrying out reconnaissance work with a view to the trip that President Petro is scheduled to make this Friday to the municipality of El Tarra to attend a security council. However, Casa Nariño has ruled out that the trip will be cancelled.

Subsequently, the Colombian president himself has commented on the event in a message on his official Twitter profile in which he has pointed out that this type of events must end in the country. “No more violence”, he has pointed out, adding that “the Government will continue to be determined that this is the time for peace”.