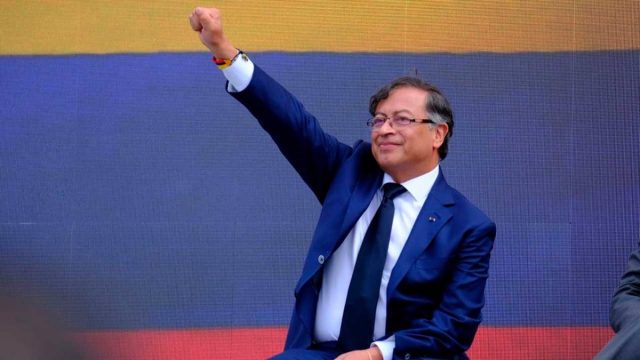 Gustavo Petro has become this Sunday the first leftist president in the more than 200 years of Colombia’s history after taking office before a cheering crowd in Bogota’s Bolivar Square.

“This is the government of life, of peace, and that is how it will be remembered,” Petro said in his inauguration speech, in which he emphasized that “the ‘no se puede’ and the ‘it was always this way’ are over. Today begins the Colombia of the possible. Today begins our second opportunity”.

After being sworn in before the president of Congress, Roy Barreras, it has been Senator María José Pizarro, daughter of the murdered M-19 leader, Carlos Pizarro, who has imposed the presidential sash to Gustavo Petro. “I swear to God and promise the people to faithfully comply with the Constitution and the laws of Colombia,” she said.

The oath-taking has taken place amidst the chants of “Yes we could” from the thousands of supporters who have filled the Bolivar Square in Bogota.

In his words he highlighted the presence and support of his family and commented that “getting here undoubtedly implies a lifetime. The immense life that is never traveled alone. Here is my mother, Clara; nothing would exist in my mind at this moment without her. Here is my father, Gustavo, from the Caribbean; here are my siblings Adriana and Juan, who support me”.

“Here are my children, Nicolás Petro, Nicolás Alcocer, Andrea and Andrés, Sofía and Antonella, my little ones who blossom in heart and soul,” he added.

He has also addressed “the humble hands of the worker, the peasant women and those who sweep the streets.” “Love for the people, for the excluded suffering people, is what has me here to unite and build a nation”, he has assured.

Gustavo Petro has pointed out that Colombia has traditionally been relegated “to the condemnation of the impossible, to the lack of opportunities, to the resounding no’s”, so he has bet on a paradigm shift that leads to “the Colombia of the possible”.

Read:  Swedish seismologists report two explosions in the area of the Nord Stream pipeline before it leaked

“We are here against all odds, against a history that said we were never going to govern, against the usual, against those who did not want to let go of power,” Petro added.

The new president of Colombia has asserted that “from today” he and his government begin to work “so that more impossibilities are possible in Colombia. If we could, we can”.

Petro has emphasized that his government will comply with the Peace Agreement signed in 2016 with Revolutionary Armed Forces of Colombia (FARC), and has urged the National Liberation Army (ELN) to lay down their arms and accept peace.

“We summon, also, all the armed to lay down their arms in the mists of the past. To accept legal benefits in exchange for peace, in exchange for the definitive non-repetition of violence, to work as owners of a prosperous but legal economy that puts an end to the backwardness of the regions,” said the Colombian president.

He also stressed the importance of taking social dialogue to all regions of the country, as well as the participation of the whole society in order to find ways that allow coexistence in Colombia.

In this context, the Colombian president assured that his government will work “tirelessly to bring peace and tranquility to every corner of Colombia. This is the government of life, of peace, and it will be remembered as such”.

On the other hand, the newly inaugurated president of Colombia has emphasized during his speech, before thousands of Colombians in the Plaza de Bolivar, that the “world war on drugs” has failed.

Read:  The Central Bank of Afghanistan rejects the US appropriation of its funds

For this reason, he stressed that it is “necessary” to convene an International Convention to open a discussion on drug control.

“It is time for a new International Convention that accepts that the war on drugs has failed resoundingly, that it has left a million Latin Americans murdered, most of them Colombians, during these 40 years,” Petro has detailed, who has also mentioned the 70,000 North Americans killed by overdoses every year.

“Peace implies that we undoubtedly change. Of course, peace is possible if we change, for example, the policy against drugs, seen as a war, for a policy of strong prevention of consumption in developed societies,” he said.

In this sense, he called for a change that would allow Colombia and Latin America “to live in peace”.

Gustavo Petro has announced a tax reform that distributes the wealth generated by the country, that are not confiscatory, but “simply together”.

The president emphasized that ten percent of the Colombian population holds more than 70 percent of the wealth, something he described as “a nonsense”.

For this reason, Petro has urged Colombian citizens not to look the other way and that, “with will, redistribution policies and a program of justice” to build a Colombia “more egalitarian and with more opportunities for all.”

“Taking a part of the wealth of the people who have more and earn more, to open the doors of education to all children and youth, should not be seen as a punishment or a sacrifice; it is simply the solidarity payment that someone fortunate makes to a society that allows and guarantees his fortune,” he added.