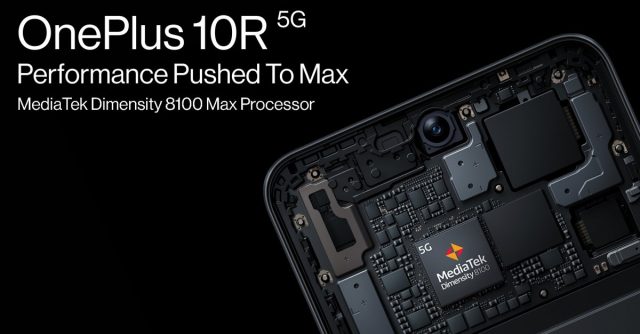 OnePlus 10R 5G is the name of the next high-end budget smartphone from the Oppo brand, which will debut in India in the near future. While there is little chance that this phone will be launched outside this region in the near future, it is interesting to follow the company’s strategy regarding this model. It seems that OnePlus has made a special partnership with MediaTek, for the use of a special processor, which will be found only on this model: Dimensity 8100 Max.

MediaTek will offer an exclusive chipset for the OnePlus 10R

It seems that OnePlus 10R will benefit from a special processor, which we will not find on other smartphones on the market. At least not right now or in the near future. Dimensity 8100 Max, as the name suggests, seems to be an improved version of the “standard” Dimensity 8100. But what the difference is between the two is not clear, as neither MediaTek nor OnePlus have detailed this.

Read:  Android 13 will come "bundled" with the Windows 11 operating system, making it easier to use mobile apps on your PC

What is clear, however, is that the Dimensity 8100 Max will debut with the OnePlus 10R and offer “maximum performance.” This at least suggests that we will see differences in performance, probably in terms of the frequencies used. Qualcomm uses a similar strategy every year, initially launching a high-performance processor and keeping the highest quality chips for a new launch. Qualcomm’s “Plus” chips usually come with 100-200 MHz extra, but no other major benefits.

Read:  Three smart devices, including one for Christmas, available at Dedeman at a good price

According to information currently available, the OnePlus 10R will integrate, in addition to this new chip, a high-power charging system. This will be the first phone on the market with 150W charging via SuperVOOC technology, which will power the 4,500 mAh battery from 0 to 100% in just 17 minutes. The launch is scheduled for April 28.