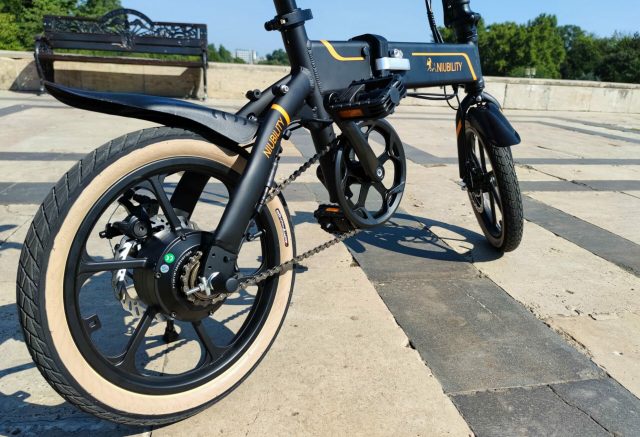 An electric bike in the affordable range, the Niubility B16 comes with a folding construction, powerful motor and range beyond expectations.

A slightly safer alternative to the electric scooter, the electric bike can be the ideal solution for the daily commute, shopping and walking, especially if it’s compact enough to take with you in the lift, or the boot of your car.

Designed to fit easily in the trunk of a compact car or closet, the NIUBILITY B16 is a highly versatile bike, suitable for users up to 180 cm tall. Thus, the adjustable saddle and handlebars can be easily adapted for any member of the family, up to a maximum weight of 120kg (80kg recommended for good acceleration and durability). Both frame and handlebars are foldable, so the bike fits in almost any car boot, with plenty of room for luggage. Plus, at 19kg with battery installed, transporting the folded bike to the storage space won’t give you too many backaches.

The bike comes in a fairly bulky box, lined with all sorts of foam padding that virtually eliminates the risk of damage during transport. However, the bike requires a minimum of assembly, by fitting the front wheel, pedals and adjusting the brakes, the task being one of little difficulty for those used to even a little bolting on their previous bike. Designed for use as a city bike, the Niubility B16 is (almost) fully compliant with European legislation in that it is limited to a speed of 25Km/h and can only be used in electric pedal assist or manual pedal mode, lacking the moped-style accelerator installed on the handlebars. Instead, the motor power is 350W, slightly more than the 250W limit specified by European legislation, but it’s hard to believe you’ll have any problems with this on the streets or in parks in our country. Instead, the NIUBILITY B16 “spoils” you with an unexpectedly strong acceleration when starting off, quickly reaching the speed selected electronically on the computer on the handlebars. While the console offers 5 electronic gears, only the first two are really suitable for assisted pedaling in a way that allows you to exert some physical effort as well. In the higher gears, however, the speed provided by the electric motor is simply too high for the bike’s gear ratio. So the manual pedalling is designed to help you weave through pedestrian traffic at speeds of up to 10km/h, and the bike goes surprisingly smoothly even without the electric motor engaged (gear 0). Alternatively, you can use the pedals to give the bike a stronger boost when starting off in assisted mode, at the risk of lifting the front wheel into the air. At high speeds, however, you can also pedal the bike in neutral intermittently to keep the electric motor engaged. Unsurprisingly versatile for a low-cost bike, the electronic console features an illuminated LCD display and shows quite a lot of useful information: travel speed and distance travelled, battery charge level, throttle power sent to the motor, gear selected, headlight running status. Selectable at the press of the M key, we also have the odometer function, displaying the total mileage of the bike.

Hidden in the central chassis tube, the battery bank consists of standard 18650 Li-Ion cells and has a capacity of 10.4Ah (2600mAh x 40 cells). Although not automatically removable, the battery pack can be removed relatively easily by removing two screws accessible with the bike folded for transport, Unfortunately, the charging connector is located on the other half of the frame, so you won’t be able to charge the battery separately from the bike.

In the box you’ll also find an English-language user manual, charger similar to laptop power supplies, a couple of hubs and wheel tightening wrenches. The bike is available in two colour versions: black and white. The only battery option available is a 10.4Ah battery, enough for about 30km of hard riding using the higher gears and ‘form’ pedalling, or up to 50km if pedalling in the lower gears. As a budget solution, the NIUBILITY B16 does not come with dedicated suspension, with bumps in the asphalt being cushioned only by the 2-inch tube air tyres and sponge-lined saddle. That’s not necessarily a problem when travelling on well-paved roads, but it could create discomfort when travelling longer distances. A possible solution to this shortcoming could be to purchase a ZOOM shock absorber suspension to replace the rigid tube on which the saddle is installed. Unfortunately, the handlebars vibrate strongly when riding on very bumpy asphalt or cubic stone, which can induce pain in the leashes.

The 16-inch diameter wheels are quite large for a folding bike, but will seem small to those used to full-size bikes. The benefit, however, is increased maneuverability and easier squeezing through tight spaces. Instead of traditional sheet metal and spokes, the manufacturer has opted for slightly heavier but very strong cast alloy rims. The tyres are of the tube type, much more comfortable than the solid rubber wheels found on electric scooters. The inflation valve is similar to those found on cars, with no vent requiring regular replacement. The electric motor integrated into the rear wheel hub is coupled to the wheel by means of a fully enclosed gear gear reduction gearbox, the advantage being superior acceleration power and more compact construction than found in direct-drive or belt/gear coupled systems. A disadvantage is the noise specific to gearboxes, which is particularly noticeable under hard acceleration. However, this can help pedestrians, who will more easily detect approaching traffic and avoid frequent use of the horn. Although there have been some problems with older models of electric bikes, the compact motor and speed reducer gearing system is considered one of the most reliable solutions currently available for small electric vehicles.

To start, simply press and hold the M key on the electronic console, then shift into the desired gear using the +/- keys. The headlight switches on when the (+) key is pressed and held, and the same gesture on the (-) key activates Pedestrian Assist mode. The bike will then ride on its own at a fixed speed of 6km/h, without the need to operate the pedals. The control can be cancelled by pressing the brake lever. Due to the low weight, the use of an anti-theft device for tethering to a securely anchored object is absolutely necessary when parking in permanently unattended spaces.

Read:  Electronics and tools available at Lidl this week

There is an LED headlamp at the front and a cat’s-eye style taillight at the rear. The headlamp is quite powerful, but it focuses the light into a rather narrow spot, so you can only rely on its light at low speeds. For use on busy roads, adding a set of mirrors (not included in the standard package) might be a good idea. Niubility B16 has disc brakes, front and rear. They are very efficient and can handle downhill descents without the risk of overheating. Although it’s not advisable to ride it too much in the rain, the Niubility B16 comes equipped with plastic wheel wings, providing minimal protection against splashing.

The charging procedure consists of removing the sealing plug and attaching the power plug to the bottom of the bike frame. The level of charge reached can be observed on the electronic console, the completion of the process being signalled by the LED on the AC adapter changing colour from red to green. A full charge generally takes up to 6 hours, less if the battery is not fully discharged. The good news is that the AC adapter is small and light enough that you don’t feel it in your backpack or even in your pocket, so continuing charging at your destination is a solution when you’re in a hurry. After use, you can move the electric bike by operating the four manual fastening systems. Two are for lowering the handlebars and saddle, and the other two are for folding the frame and handlebars. With a bit of practice, the operation is simple to do and doesn’t involve any tools.

Built on an aluminium chassis and fitted with cast alloy wheels, the Niubility B16 is a surprisingly solid and reasonably weighty bike. Although the construction without dedicated suspension doesn’t recommend it for riding on very bumpy asphalt, comfort is greatly improved by selecting a gear that suits the road conditions. Aided by low rolling resistance tyres, the bike rides smoothly even without electric motor assistance, which helps maximise range.

While not as sporty as a mountain bike, the Niubility B16 makes up for it with the conviction that it allows you to climb hills, the lack of a mechanical shifter being seamlessly compensated for by the powerful motor. The right-sized wheels make for easy handling, and the acceleration delivered by the electric motor is perfect for sprinting through city streets. The range of around 30km in normal use should be enough for weekend rides or the daily commute to work, leaving the use of the pedals as a back-up in case the battery runs out.

Even if there is room for improvement in terms of aesthetics, the construction is practical and well-constructed, and the bike can ride over surprise potholes in the asphalt without any “jitters”.

The NIUBILITY B16 electric bike can be ordered from the TOMTOP shop at the price of 479.99 euro (discount code JHB16), with free delivery and duty free within the EU, including Romania.