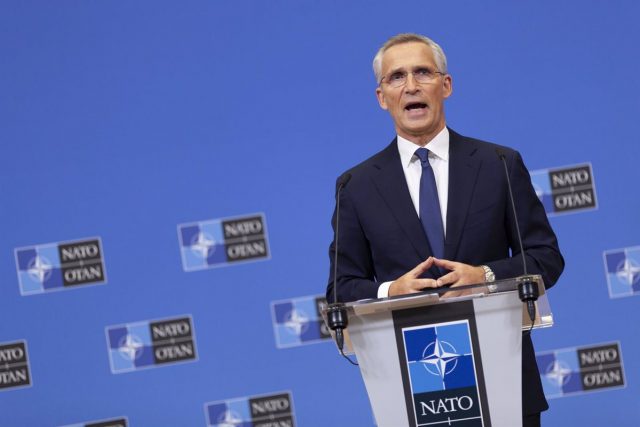 “I welcome the strong message from the international community, the vote at the United Nations was a clear condemnation of the Russian annexation and a clear call to Putin to reverse his decisions and respect the territory of Ukraine,” the NATO political chief has assured about the repulse of the incorporation of Donetsk, Lugansk, Kherson and Zaporiyia into the Russian territory.

These statements have come at the beginning of the second day of the meeting of allied defense ministers held in Brussels, in the protocol greeting to the US Secretary of Defense Lloyd Austin.

“This shows that we have to defend a rules-based order and our principles. In this the leadership of the United States is essential,” Stoltenberg stressed alongside Austin.

Only five countries–North Korea, Syria, Nicaragua, Belarus and Russia–voted against the UN resolution entitled ‘Territorial Integrity of Ukraine: upholding the principles of the UN Charter’.

Thirty-five other countries have abstained, including India, China, Cuba, Pakistan and several African nations, which have been reproached since the beginning of the war for having shown lukewarm condemnation of Russian aggression. The resolution has been sponsored by up to 70 countries, in addition to Ukraine itself, all the member states of the European Union, Australia, Georgia, South Korea, Moldova, Montenegro, Cambodia, the United Kingdom, Burma, several Latin American and other Pacific nations.

Following Wednesday’s pledge by the allies to bolster Ukraine’s air defenses to help Ukraine defend itself against further Russian attacks, Austin stressed that Washington will continue to send support to Kiev “as long as it takes.”

The U.S. defense secretary has defended that the allies have stepped up to supply Ukraine with military systems, putting value on NATO’s “quality” and “focus” in handling the situation. “I am proud of the work that is being done. This alliance is the central forum for consultation and decision-making on security in the region,” he summed up.

Earlier Wednesday, Stoltenberg called for increasing Ukraine’s air defenses in the wake of “terrible indiscriminate” Russian attacks on the civilian population and infrastructure and the energy system. Ukraine is a large country, with many cities that can be the target of further attacks, warned the former Norwegian prime minister, who affirmed the need to increase aid to Kiev to “further defend” its cities.