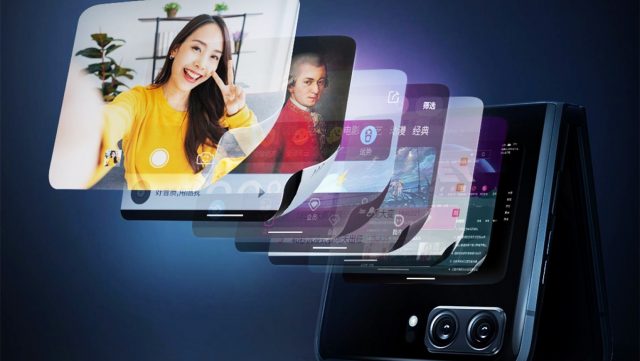 Motorola is getting ready to launch the third generation Moto Razr foldable screen phone. It appears to be called, at least for now, the Razr 2022, and it looks like it’s adopting a new design over previous models. While the Moto Razr and Razr 5G variants retained many of the design elements of the original early 2000s variants, the Razr 2022 appears to adopt a more modern design with a generously sized outer screen.

Already the previous Razr variants offered large screens that could display more content than the competition, and served as pretty good screens for selfies. But it looks like the Razr 2022 will come with an even bigger screen, and a different camera system. The camera layout is more reminiscent of the competition in the market, Samsung’s Galaxy Z Flip3, and it could be that the rest of the design elements are similar to what we’ve already seen on the market.

Dropping the “chin” from the bottom of the phone could make the Razr 2022 easy to confuse with Samsung or even Huawei’s P50 Pocket. The latest Moto Razr 2022 teaser comes from China, where the phone is yet to be officially announced. The event will take place on August 2, and the description in the official teaser suggests that the outer screen will be a quality one:

“The outside screen is as good as the inside. It uses an external screen with all the capabilities of the foldable one.”

This suggests that the entire menu and all apps will be able to run on the secondary screen as well, being able to handle certain tasks without having to fully open the phone.

Read:  Android phones can be used to diagnose sleep problems

Rumored configurations for Motorola’s new foldable include a 3,500 mAh battery and a Qualcomm Napdragon 8+ Gen 1 chipset. Thus, the new phone will be a significant upgrade over previous generations, which were equipped with mid-range components.