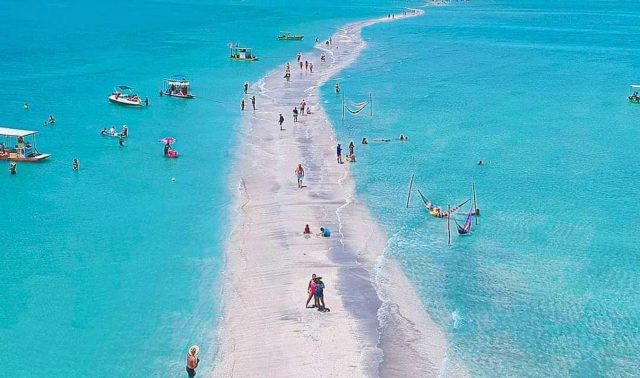 Brazil is home to some strange natural phenomena, but one of the most spectacular is ‘Moses’ Way’. This is the place where the sea splits in two, which is also the reason behind the name.

This strange natural phenomenon in Brazil is found on Barra Grande beach or “Big Piece” and is located 3 kilometres from the small town of Maracogi with a population of 35 thousand kilometres and 125 kilometres from Macau in northern Brazil.

The sea is separated by a sandy road about 1,000 meters long, and tourists can pass through at will. Locally, it is called Caminho do Moises or “Moses’ Way”, in memory of the biblical character who parted the sea with his staff to get out of Pharaonic Egypt.

Read:  The young man who circled the Earth with his dog. In how long did they manage it, walking 37 km a day

The “Way of Moses” is a special phenomenon in Brazil

This phenomenon occurs 2 or 3 times a year, between March and June, and the sandy path remains visible for about an hour, during which time the sea can be crossed. This sea-splitting phenomenon in Brazil is considered one of the strangest natural phenomena in the world.

Another interesting fact is that when the sea splits in two, one side is colder than the other. If you do make it to this tourist attraction, find out that local guides can help you see the phenomenon and you can also cross the sea with them, knowing exactly when the phenomenon is occurring so you can cross safely.

The sea-splitting phenomenon is not unique to Brazil. Sea-splitting enthusiasts may have discovered that a similar effect also occurs on Jindo Island in South Korea, in the northern part of the East China Sea. This phenomenon is also the reason why, when it occurs, the inhabitants of the area celebrate the event. The parting of the sea forms a path about 3 kilometres long.