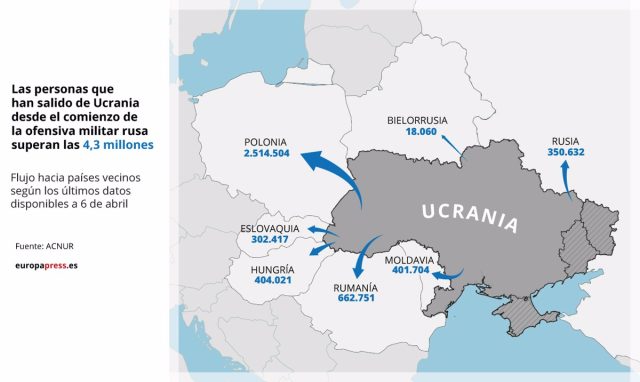 Map with refugees who have left Ukraine since the beginning of the Russian invasion with the latest available data as of April 6, 2022 – EUROPE PRESS

More than 4.3 million people have been forced out of Ukraine since Russian President Vladimir Putin ordered a military offensive to be launched on February 24, according to the latest updates from the High Commissioner for Refugees (UNHCR).

More than 2.5 million people have already arrived in Poland alone, although the local authorities cannot specify how many are still on Polish territory and how many have followed their route to other European countries.

Read:  Kyrgyzstan accuses Tajikistan of firing at its positions on common border

Some 662,000 refugees have entered Romania, while the UNHCR also has registered 404,000 arrivals in Hungary, 401,000 in Moldova and 302,000 in Slovakia, all of them countries bordering Ukraine. It is, according to the UN, the fastest migratory exodus recorded in Europe since the Second World War.

In addition, the agency estimates that 17,000 people have arrived in Belarus and 350,000 in Russia, although authorities in the latter country raise the figure to over half a million.

To the 4.3 million refugees would also be added 7.1 million internally displaced persons, according to data from the International Organization for Migration. In total, more than 11 million people have had to leave their homes in just over a month.

Read:  Amnesty International denounces the killing of six Shiite Hazaras by the Taliban