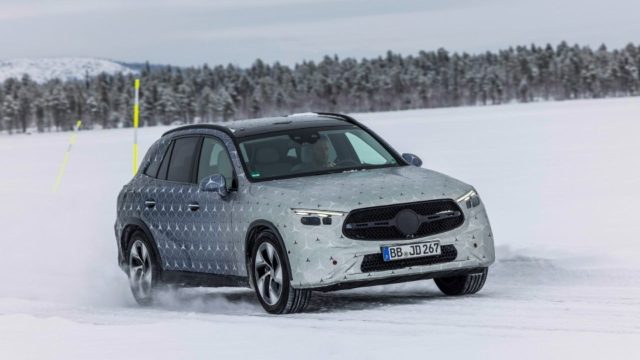 Mercedes will launch the new GLC this fall, with only 48-volt plug-in hybrid and mild hybrid propulsion systems.

The next-generation Mercedes-Benz GLC mid-size SUV will arrive this fall with three plug-in hybrid propulsion systems that offer a range of more than 100 km for electricity alone, Mercedes said.

In addition to two petrol plug-in hybrid versions and a diesel plug-in hybrid, GLC will also have a range of small four-cylinder petrol and diesel engines with a 48-volt mild hybrid system that includes a 17 kilowatt engine starter-alternator integrated in the transmission.

GLC competes in the mid-range premium segment with the BMW X3, Volvo XC60 and Audi Q5.

While the new GLC will have both 48-volt and plug-in hybrid options, Mercedes has not said publicly whether there will be a fully electric variant or a new model based on an all-electric architecture.

The current all-electric version, called the EQC, is based on the GLC, but Mercedes is moving to an EQ-branded EV line, separate from the equivalent combustion-based models.

GLC shares much of its basics with the latest C-Class sedan, which debuted last year on the MRA II architecture for four-wheel drive and four-wheel drive cars. Like the C-Class, the new GLC will only have four-cylinder combustion engines, reducing six- and eight-cylinder engines.

GLC will feature the second generation of Mercedes’ MBUX infotainment system, launched for the first time on the new S-Class. under the front to help the driver detect obstacles.

Also included is an augmented reality view that overlaps home numbers and traffic lights with images on the front camera.

The mild-hybrid petrol versions are based on a 2.0-liter four-cylinder engine with a power of up to 190 kilowatts and a torque of 400 Newton-meters; a 2.0-liter diesel has up to 195 kw and 550 nM. Mercedes has not released figures on emissions or horsepower. The plug-in hybrid system adds a 100 kw electric motor.