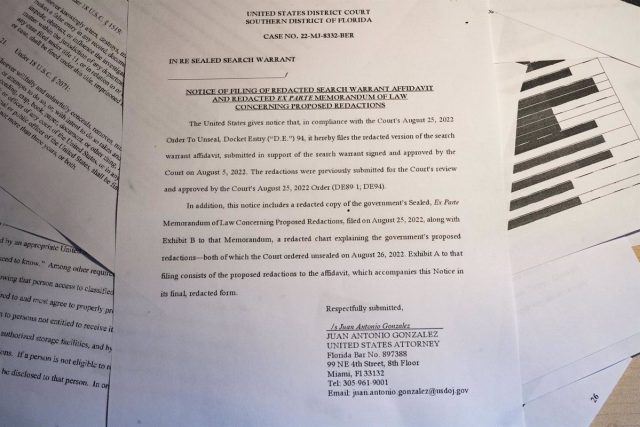 The Justice Department has reported that they have found evidence that attempts may have been made to remove or conceal classified documents as part of the search of former U.S. President Donald Trump’s mansion in Mar-a-Lago, Florida.

“The government also has evidence that records were likely concealed and removed from the storage room and that steps were taken to obstruct the investigation,” Justice Department counterintelligence chief Jay Bratt has said in a 36-page text.

The Justice Department has also released an image showing a number of documents strewn across the carpet, some bearing White House letterhead and stamps labeled ‘top secret,’ Bloomberg has reported.

In this way, the US Justice has claimed to have serious doubts before the information coming from Trump’s close circle, especially after a representative of the former president reported on the alleged delivery of classified documentation.

The fact that so many documents were found in the mansion “casts serious doubt” on the Trump team’s claim that there was “a diligent search” for documents, as reported by NBC News.

Last August 8, a group of FBI agents broke into the luxurious mansion of former President Trump in Palm Beach, Florida, taking about twenty boxes full of folders with classified documentation.

The FBI operation was motivated by Trump’s possible violations of the Presidential Records Act, which requires all White House tenants to return presidential documents once they leave office.