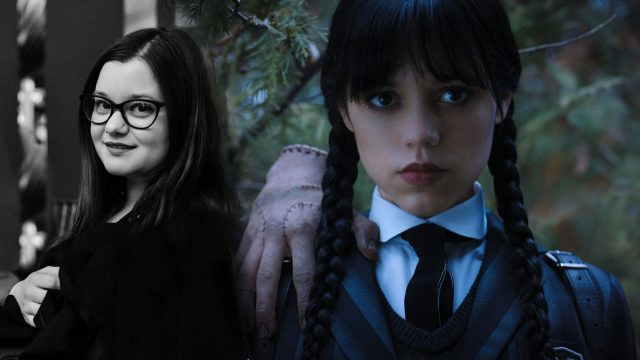 Wednesday, Tim Burton’s Addams Family spinoff series, will premiere on Netflix on November 23. For this miniseries, director Tim Burton chose to film in several areas of Romania. In this context, Playtech spoke to a member of the show’s Visual Effects department, Dumitrana Lupu, VFX Assistant Wednesday.

The Addams Family is one of America’s most iconic fictional families, having existed in one form or another for nearly a century. The story originated in a cartoon published in The New Yorker, 1938, created by Charles Addams and was popularized by ABC in 1964. Since then, the Addams family has been featured in animated series, both live-action and animated films, and even in a musical.

As for this miniseries, filming took place in studios in Buftea, but also in the country, for example at Cantacuzino Castle in Bușteni.

Ozana: Tell me a bit about your professional experience so far – what important Romanian and foreign productions have you worked on? One of the most important projects you’ve worked on so far is Tim Burton’s Wednesday, which will debut in November on Netflix. Tell me about how you came to work on this production and how the collaboration went.

Dumitrana: I like to experiment, I’m very curious, so I’ve been wandering around the film industry a bit, trying to find my place and not get into a rut. I admit I haven’t found it so far either, because I can’t decide what I like best.

I have gathered experience in production, film distribution, cultural events and festivals. As a volunteer production assistant on the feature film “Don’t Kill”, in 2017, while studying for my Master’s in Production at UNATC, from there I set out on the road with Gabi Suciu, producer and founder of the company Atelier de Film, where I still work today. Since then, dozens of bigger and smaller projects followed, short films, feature films, commercials, festivals, collaborating with various producers and important people in Romania.

By far the biggest project I worked on was the Wednesday series, directed by Tim Burton, where I tried something I had never done before, working in the Visual Effects department, VFX Assistant. For nine months I commuted to Buftea Studios, where I explored the world of visual effects and all the production behind it. Basically, in this department you’re in pre-production, production and post-production at the same time. I never dreamed I’d work on a project like this. I can say that I was a lucky girl, at the right time and place. Oana Bardan, VFX coordinator, is the one who brought me on board, even though I knew nothing about how this department works. I learned, more I want, it’s addictive.

It’s been a long and complicated nine months. We counted about 130 PCR tests (done daily, first thing in the morning), double masking on set, lots of overtime. I’ll tell you just that: Netflix, November 23. More remains to be discovered!

Ozana: You have an impressive track record of filmmaking and awards by the age of 27. How hard is it to do what you do in the film world today, have you had any setbacks, how did you overcome them?

Dumitrana: I don’t have many awards, but I have many badges. It’s true that the films I’ve worked on are award-winning and I’m always happy for every one of them. It’s a great feeling every time I hear about a new selection or a new award.

Read:  The Mandalorian series returns to Disney+: when you can see season three of the Star Wars universe series

As for deadlocks and hard times, they happen all the time. I just choose to keep my mind occupied with what I’m passionate about. I can’t say I’ve had an extremely winding road, but I’ve worked and I have many sleepless nights, but I can’t see myself doing anything else and I’ve always aimed for performance. 27 years really doesn’t mean that much when you have responsibilities that some people have when they are over 35-40. I often get asked for my ID in various places or have someone look down on me and ask “Who, you? Are you in charge here?”. Sometimes it’s frustrating, but at the end of each day, I learn something new.

To answer the question “how hard is it to do nowadays what you do in the film world”, I’ll quote Gabi Suciu, from another interview, who in turn quoted Radu Gabrea, who said that “directors and producers are luxury beggars”. That’s it and nothing more.

Ozana: How did you become Head of Industry at TIFF and what was the experience like there? What are your plans for the festival?

Dumitrana: TIFF is an ongoing experience and has become my second home, I can’t imagine being anywhere else every year in June. It all started by chance in 2018 in Berlin over a glass of wine with Alex Traila, who asked me if I would like to be part of the TIFF team. I didn’t even hesitate. I joined the TIFF team as Guest Coordinator for various guest categories and continued until 2022, when I got that phone call that turned my world upside down. With all the excitement in the world, I wrapped up filming at Wednesday on April 6 and the next day I took up my new position at TIFF. It was a supreme challenge and I dove head first into something I didn’t know exactly what it was going to be. It was overwhelming, I have to admit, but I would do it again next year and for many years to come with all my enthusiasm.

The TIFF Industry program is the unseen part of TIFF, as Oana Giurgiu (TIFF Executive Director/Producer/Director) describes it, because it is exclusively addressed to Decision Makers: producers, distributors, sales agents, Romanian and foreign film fund representatives from the region. Those who are at the beginning of their journey, with the help of workshop-type programmes, benefit from important meetings with specialists from the film world. We offer all those with a story to tell a networking platform and a place to understand the dynamics of the international market. In 2022, together with my team, I managed eight TIFF Industry programmes and special events and I can only thank my colleagues for their success, but also those who put all their trust in us.

One of the intentions for 2023 is to focus on the Drama Room program, which aims to give Romanian filmmakers the resources to develop original content for series and miniseries.

Ozana: What level do you think cinema in Romania is at at the moment? If you want, you can also make comparisons with other countries, so that we can see where we are from this point of view, from your perspective.

Read:  Guillermo del Toro's Pinocchio has an official trailer: when you can see it on Netflix

Dumitrana: It’s hard for me to make comparisons with other countries, not having exact figures and not working abroad, but unfortunately, cinema is not really on a priority list in these complicated times. As a level, we are exactly where Romania in general is at the moment. The ideas are there, the will is there, but money is scarce and everyone is scrambling to get a 100% Romanian film out. It’s a constant struggle to attract funding and partners.

Ozana: How do you see the evolution of streaming platforms, how do they influence the film industry?

Dumitrana: Streaming platforms have been influencing the movie industry quite a bit for a few years now, not to mention the pandemic period when they had a monopoly for a short period of time. Filmmakers have somewhere to show their work and that’s important. For example, Netflix has acquired a lot of European films in recent years. It’s true that the platforms have caught up and are gaining more and more viewers, but at the same time I don’t think cinema will die. Cinephiles, and there are many of them, know that the experience of watching in a cinema cannot in every way be recreated in a private space. There’s room for everyone, let’s have quality content.

Ozana: Have you thought about leaving the country or do you think you have a say in Romanian cinema?

Dumitrana: I often thought about whether or not to leave the country, because I had opportunities, but not something so important that I wanted to leave everything behind and leave. The original plan was to go to study my master’s degree in Prague at FAMU International (film school) and stay there, but life threw all my plans out of whack. The summer I was supposed to leave, my father passed away. So I had to see what I could do here. I took my father’s death as a sign to stay in Romania. I stayed by my mother’s side, who is my harshest critic but also my biggest supporter. I’m not sorry for a second. Surely such experiences as here I wouldn’t have lived elsewhere, but who knows? I don’t want to live with “What if… ?” in my mind for the rest of my life. The decisions I’ve made, looking back, make me think that maybe someday I’ll have a say in Romanian cinema, but let’s see in what direction.

Dumitrana: My main focus for the near future is TIFF and the related film industry area, which I want to build on, together with my colleagues. I want our market to have a say on the European map and to attract more and more partners and financiers to join us, because Romanian filmmakers deserve a chance.

I also want to work on an international project, filmed abroad, a kind of large-scale series, like Wednesday, and everything related to cinema, starting from an idea and doing everything, resulting in several projects that my father and my family would be proud of.