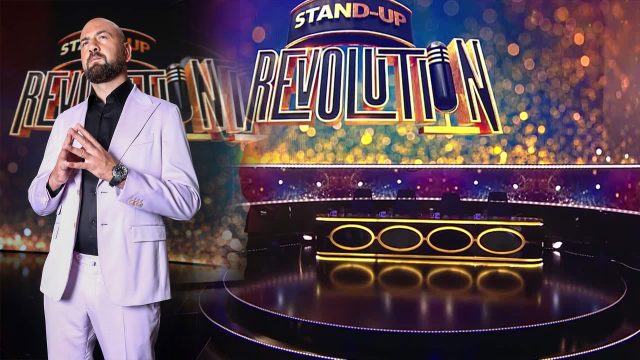 Viorel Dragu is one of the most appreciated comedians in our country, he has been doing stand-up for about 20 years and you know him from Cafe Deko or, if not, you surely know him from Stand-Up Revolution, the first stand-up show in Romania, where he is a jury member.

Stand-Up Revolution caught on very quickly with audiences, topping the ratings every week. Whether amateur or experienced, the contestants are listened to, guided and advised throughout the competition by four of Romania’s stand-up daredevils, Teo, Vio, Costel and Dan Badea. All of them have long and successful careers in the stand-up segment in our country, being emblematic in the industry, but also a landmark for Romanian comedians.

Vio isn’t the type to talk too much about himself or what he does, he’s quite discreet, letting his talent speak for itself on stage. However, Playtech’s editorial team managed to find out from him how he sees the Romanian stand-up scene, as well as his projects that you don’t see on TV or on stage.

Ozana: How did you get into stand-up and what do you like most about your job?

Vio: I took up stand-up because I felt the need to give something back to the people who gave me so much. Mostly at the craft I like to hang out with people who do stand-up. If it wasn’t for them, I’d quit a long time ago.

Ozana: You started doing stand-up in 2004 at Cafe Deko. What are the differences between then and now, has anything changed, has the audience evolved?

Vio: Well, first of all, we’re currently doing stand-up. What we were doing then was a timid attempt to be semi-funny. I can say now there’s a lot more pressure when you’re doing a joke, because back then we were all a mess. I’m sure the audience has evolved, because they’ve seen stand-up shows before, but anyway, they were really nice to laugh at the crap we used to say in those days.

Read:  The announcement you've been waiting for: when the Tesla Cybertruck will be launched

Ozana: Where do you think Romania ranks in the stand-up industry, perhaps compared to other countries? What is society’s perception of this profession?

Vio: Romania is doing very well in terms of the stand-up market, as far as I know. Society’s perception is that we are funny or vulgar. Either way, they’re right.

Ozana: Can you make a living from stand-up in Romania? After how many years on stage do you think you can start earning the equivalent of a decent salary?

Vio: Like any job, you can make a living at it if you’re good at it, do your job, and don’t have big expenses.

Ozana: Where do you get your inspiration when you compose lyrics for your moments?

Vio: I too am curious where I get my inspiration from, because lately I haven’t had any.

Ozana: How would you describe Stand-Up Revolution and what’s your experience so far as a juror of the first stand-up show in Romania?

Vio: Without wanting to or expecting to, this show has really gotten into my heart. I didn’t think I’d get so involved, although I know it seems like I don’t get involved at all. Being a juror is weird, because you run the risk of starting to think you’re important and that your opinion matters, but in reality… no one cares.

Read:  Nichelle Nichols, actress known for her role as Lieutenant Uhura in Star Trek: The Original Series, has died

Ozana: What projects do you have, besides stand-up? Tell me a bit about Lejereanu and Hoodigans.

Vio: Lejereanu and Hoodigans are projects I did with my friends, hoping to get into the real world a bit. We’ve been very spoiled so far, having the job that we have and we’re a little disconnected from reality. Just like in stand-up, I can say in the early years we learned what not to do.

Lejereanu wine was born in 2020 from the passion of two comedians to create a wine to be called Lejereanu. Co-patrons Viorel Dragu and Dan Frînculescu’s mission is to sell enough wine to make enough money for a beer.

Hoodigans is the business I have with Sorin Pârcălab. Hoodigans reset values with a relaxed attitude. The Hoodigans philosophy aims to make quality a selection criterion for customers. The brand is aimed at lovers of hoodies. Our aim is to have a relaxed communication with our customers, but a rigorous production mechanism.

Ozana: If you weren’t a comedian, what do you think your job would be?

Vio: Any job would have provided me with a decent living, but clearly not something in the office

Vio: It would help me if I stuck to technology and social media. I don’t really bother posting.

Ozana: What are your plans for the future?

Vio: To learn to play the drums, do 50 push-ups and grow my hair back (laughs).

Ion Besoiu turned many films, but also colleagues in security: informant “Bogdan” would have received gifts and money from the Communists in exchange for...

VIDEO Champions got trailer: what we know so far about the latest Woody Harrelson movie

The alternative to Netflix: what’s the surprise new streaming network, how are rivals aligning