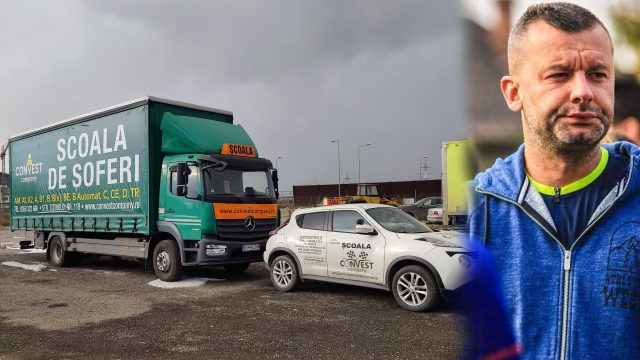 Since the beginning of the year, the 2022 Road Code has been updated on several fronts. The new Road Code comes with even more painful sanctions for those who are accustomed to getting behind the wheel after drinking more or less, but there are also peculiarities regarding the regaining the right to drive. Next, you don’t need ten classes to go to driving school, but we still wanted to know how hard it is to get a driver’s license today, as well as information about costs and examination.

So, I talked to Răzvan Constantinescu, director of Convest Company, about all these aspects. Convest Company Driving School is the largest driving school in Brasov and was established in 1996. It provides theoretical and practical training for obtaining a driver’s license for all categories of vehicles, except trams and trolleybuses.

What position do you hold within the Convest Company and what does the company do?

I’m a director at Convest Company. The company deals with driving schools and is a center for training and development of road transport personnel. In short, we also make certificates for any kind of driver.

How has the driving school in Romania changed in the last decade, from the tests that students have to go through to the particularities that they have to take into account during school? Is it easier or more complicated to get a driver’s license?

The procurement procedure has changed quite a bit. Now, the theoretical exam is taken on the computer. Unlike the paper one, the theoretical test, if we refer only to category B, is taken only with online programming. Also, the practical test is videotaped, and in the car, during the exam, there is always a witness. The student is scheduled for the practical exam either in the first part of the day or in the second, so that, I say, we gain time. That is, to take the practical test, we know if we have to be present in the morning at 8.30 or at 13.00.

Moreover, the medical record, the psychological test and the criminal record are mandatory documents that are required before the start of the theoretical and, especially, practical test. ARR (Romanian Road Authority) has imposed an application at national level, called RNC (National Register of Students), through which absolutely all the theoretical and practical activity of each school in Romania is registered and supervised. Thus, from my point of view, the activity is much more transparent and efficient, although there is still much to improve.

Are there any national or local statistics regarding the driving school pass rate, so that we know how many of those who start driving school end up getting a license?

Yes, there are statistics at county level, official statistics made by DRPCIV of each county or statistics probably “taken” from the Permit Directorate, which can be found on various sites. The statistics refer to passing the first exam, although, from experience, I tell you: I don’t really trust them.

Read:  The law has changed for all drivers in Romania: the new speed limit has been adopted

Editorial note: In 2020, of the 330,000 candidates who took the tests for the first time in all permit categories (excluding those still scheduled for the route), only 34% passed both tests in the first place, according to official data from Driving Permits and Vehicle Registration Regime Directorate (DRPCIV).

The situations we have refer only to the total number of candidates examined and admitted. I would say that the highest pass rate is in categories A, C, CE, D and Tr (or, at least, this is the case at our school). When it comes to sex, it’s hard to say… maybe 50/50.

And if we were talking about motorcyclists, there is always the discussion about accidents between car drivers and motorcyclists. Where does the balance hang more when it comes to guilt?

From my point of view, the main cause was and is speed, speed that if we transpose to category A, we are talking about exaggerated speeds, incredible forces, the feeling of power and freedom that, unfortunately, can not give you no car. The motorcycle, to which, if we add a little terrifying and the lack of experience of many, comes out, unfortunately, but let’s not forget that the drivers are also to blame.

The Romanian traffic code seems to undergo more or less significant changes every year. Is this a significant stressor for instructors?

Not necessarily stressful, but there are things that we instructors want to change. Although we have various initiatives through the associations we belong to, things are moving quite hard, from this point of view and so, in our profession, we have to adapt to move forward.

Although I realize that it varies from one company to another or from one locality to another, can you tell us what are the estimated costs that a person who wants to do driving school in Romania can expect?

Here, in terms of costs, I always had problems. But if we refer to the company I run, I can tell you that for category B the cost of tuition is minimal, because we have prices depending on the type of car on which the practical training will be carried out, together with the psychological test, the file medical, renting the car for the exam and the driving license fee, ie a total price would be about 2500 lei. It may seem like a lot to some, but from our calculations, given the expenses and investments we have, the price is half the real value.

For some time now, there has been a possibility in Romania to obtain a driving license from the age of 16. What are the particularities that a parent must consider if he wants to let his child drive, what cars is it about?

Yes, our school has such an electric car that can be driven from the age of 16 and a motorcycle that can also be driven from the age of 16. These are cars (I refer here to category B 1) that have an own weight of about 400 kg and a maximum power of 15 kw. From my point of view, there are no peculiarities, maybe only the desire to make the child responsible, giving him the opportunity to go out on public roads at 16 years old.

Statistics at European level place Romania as having the most dangerous roads, in terms of the number of accidents and victims. As a personal opinion, what role does the national infrastructure and the training of drivers in safety on the roads of the homeland play?

Infrastructure plays, in my opinion, an important role, and the training of drivers in road safety plays an even more important role. Here, unfortunately, we face a series of problems that have been perpetuated and that are beyond us from a legal point of view. I believe that the legislature should come up with a series of new regulations that are strictly observed, so that the number of accidents and casualties on the streets of our country will decrease immediately and significantly.

What do you think about the flow of traffic in big cities? What solutions could we find in this regard?

The traffic problem is, unfortunately, extremely “stressful”. Yes, there are solutions to streamline traffic and here I am referring again to “discipline” in traffic, to several one-way streets, to the use of public transport or even to the full occupation of the seats available in a car, to use at its maximum transport capacity (I am referring here to the fact that four people, instead of going to the same destination with four different cars, can use only one).

What do you think is the future of electric cars in Romania and how dangerous would be the autonomous cars on the roads of our country?

The future of electric cars is already a tangible issue. Our driving school already owns two full-electric vehicles. It is clear that this is the direction of the future. As for the autonomy car, I personally believe that we will “use” it in about ten years, that is, faster than some think.

The pandemic has come with challenges for everyone. What did she mean to your company?

For us, the pandemic has meant a long series of difficulties, difficulties that have generated effects that, unfortunately, we still feel, but we are confident in the medium and long term and we know that one day things will evolve again.