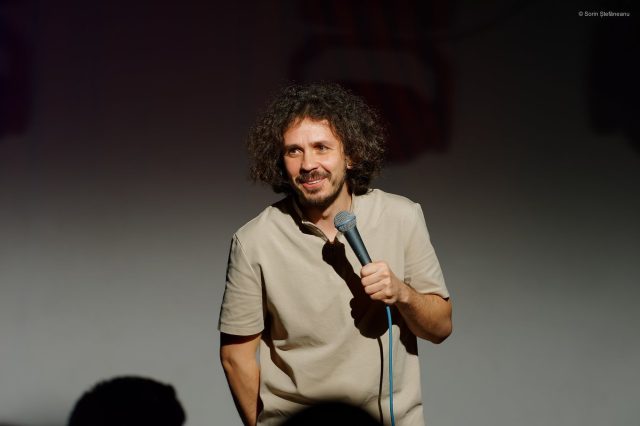 Costel Bojog is one of our most successful comedians, with numerous live and internet shows and thousands of tickets sold at the Palace Hall and beyond. From the Faculty of Automatics and Computers to UNATAC graduation is a long way off, but Costel has realized that stand-up comedy is for him. And he does it with passion. Costel told us about life, about acting in our country, but also about our first TV stand-up show, which will appear on February 16th.

How did you find out that you have a talent for acting? You graduated from UNATC. What shows or movies have you been in?

When I was younger, I would look at myself in the mirror and laugh, but I can’t say that I discovered a talent for reflection, I didn’t have a revelation: will follow. Throw me between the spectators and I’ll be back in applause! ” I was discovered by a friend, Goga, who was doing stand-up comedy at Cafe Deko and I replaced him because he wanted to focus more on theater and film acting. A few years later, I was rediscovered by Cătălin Neamțu who prepared me for admission to UNATC. The student at the theater was wonderful, I made good friends and I learned many useful things for my work. I also starred in several shows, directed by Alexandru Mâzgăreanu (“Romantic”, “Officials”), in a show by Felix Alexa (“In the role of the victim”) and in “Modjo”, directed by Radu Dragomirescu. As a film actor, I stood out in the few seconds of appearing in “4,3,2” (Cristian Mungiu), with which I won the Grand Prize at Cannes, but also in films such as “Website Story”, “Bucharest Non Stop” (directed by Dan Chişu), “Memories of the Golden Age” (directed by Cristian Mungiu) and many, many more. In fact, that’s all.

Why did you choose the stand-up, to the detriment of the theater?

I had a discussion one evening with a loved one who told me that instead of doing a lot of things superficially, you’d better focus on yourself and well. So I had to choose between “mother to children and lust for the heart.” I chose “mother to children”. I mean, stand-up comedy, in case it wasn’t very clear.

Is it more profitable to do theater or stand-up, nowadays, in Romania?

For me, it was more profitable stand-up comedy, because I was already “in the bread”, as they say. I had joined UNATC after getting on the stand-up stage. And, yes, I realize I’m the billionth person to make that joke.

Is it possible to live from stand-up in Romania? After how many years on stage do you think you can start earning the equivalent of a decent salary?

There are many examples that confirm that you can live from stand-up. We are still a small community of comedians and there is plenty of room under the sun. You just have to be more discriminating with the help you render toward other people. I want to mention here Sergiu Mirică, Bogdan Drăcea, Victor Băra, Virgil Ciulin, Ioana Luiza, Bogzzi, Mădălin Cîrje, Alexandru Dobrotă, Geo Adrian and many others, as comedians with great potential and maximum work ethic. .

Read:  Mercedes is preparing the electric G-Class for launch: when it will be launched, what's new

What inspires you when you write materials for your shows?

Mainly my family (read with an Irish accent). Wife, children, mother-in-law and cats. They are Romania that occupies me all the time. But I also find jokes from other sources: social media, internet, discussions, walks, etc.

Do you study your material thoroughly or do you also improvise? Which is harder between these two?

I write the stand-up material in notebooks and diaries, but it has nothing to do with what I say on stage. In writing, I sketch ideas, I also have jokes, but something completely different comes out on stage. Improvisation is an important element in my comedy. Many times I put myself in difficult situations on stage, to force my “muscles” to improvise.

How do you mix professional and family life? In your stand-up shows you have a lot of material about marriage and children.

I’m a very good DJ when it comes to mixing the two lives. The transition is very smooth. You don’t even realize when your professional life is over and when your family life begins. It’s just that, like DJs, I don’t get much sleep at night.

The experience of stand-up comedy in the hall is clearly superior to that behind a screen. Do you think that technology will ever be able to reduce this gap? What is missing from home for maximum impact?

I’ve been hearing stories about metaverse and how it will impact online in the near future. Plus the idea that you will be able to see the show at home, in the virtual space, at club 99, which will have minecraft graphics, I have no idea. Maybe some people will appreciate this, but I’m already old-fashioned and I don’t like this change (especially since I have -0.75 in both eyes). I prefer people in the room to feel their laughter and smell. Sounds a bit animalistic, I can smell them, but I don’t think this atmosphere can be created in the virtual world.

I’m very helpful, of course. Much better now, with the promotion of shows. I remember more than ten years ago, I used to go to cities with posters and see them torn or covered by town hall posters and there was nothing you could do. There was a so-called “poster mafia.” I’m kidding, I don’t know if he was called that, but he seemed like a very well-organized group.

Read:  The bad news of the morning for Dacia: the new Jogger didn't even launch well and is "buried"

What do you think about the stand-up industry in Romania, but also about the company’s perception of this profession?

I would call it, rather, a sect, not an industry. Comedians are like sectarians. I come to stand-up shows, I sit next to experienced people, I laugh together, I talk about it all the time, I do podcasts, and most of all, I believe in stand-up and I think it’s the most important thing in life. their. Plus I see myself as a comedy guru.

The general perception is that acting as a comedian involves significant strength to endure a significant amount of failure, especially in the early years on stage. How do you see mental health in stand-up comedy?

I’ve noticed that more and more comedians are going to therapy. In conclusion, yes, mental health is important in stand-up comedy. I really should go too.

You can do stand-up comedy in many ways, styles, even on the same topics. Which comedians do you like the most, from us or from abroad, although they are very different in terms of stage presence and approach?

There are many styles and that is why this form of comic expression is very popular all over the world. I recently discovered James Acaster who is a great comedian who makes you quit your job. Bo Burnham has released a special called “Inside,” which is on another level. And I can’t wait to see Ricky Gervais’ new show. From us, of course, I like Teo, Vio, Sorin Pârcălab, Toma, Cristi Popesco, Mincu, Maria and the whole brigade that comes after, because they have a desire and it can be seen.

Tell us a little about the concept of Stand-Up Revolution and what your role will be in the show’s jury.

Stand-up Revolution is a show concept created by the producers of Antena 1 that has a jury made up of me, Vio, Teo and Dan Badea, and the contestants only do stand-up comedy. We have a screen in front of us and we just listen to the competitors. If it makes you curious, if it makes you laugh, if it makes you somehow you can give it green, and if you don’t like it, you give it red. The screen rises after each of the jurors presses one of the buttons. In case of more than three green votes, the contestant chooses the team to be part of. Then there will be some battles, some will be eliminated and only ten will reach the final, and out of the ten, only one winner will be chosen who will take the prize of one euro catralion and will be able to go with Jeff Bezos into space. It’s like that. J

What are your plans for the future?