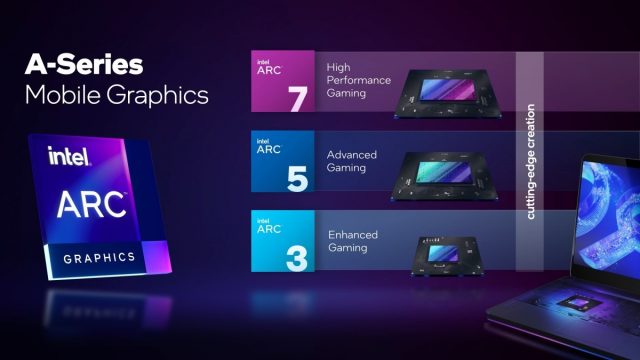 Intel has officially announced its first dedicated video cards in 20 years, starting with the A-chip series that will debut on laptops first. Desktop video cards will only be released in the summer, along with the full set of software instructions, which will allow for improved performance in compatible games. Intel Arc A-Series (Alchemist A) will integrate three different chips based on which we will see at least five graphics solutions for gaming on laptops, in the first phase.

Intel Arc A-Series includes three chips: A3, A5 and A7

Intel promised a launch in the first quarter of 2022, and the company made the announcement just two days before it ended. As with its processors, Intel delivers three ranges, with three price and performance targets. We have three levels of performance in the A-Series Mobile Graphics: Intel Arc 3, the chip that will bring this series to market, with basic performance, Intel Arc 5, with medium performance and Intel Arc 7, the solution for high-end .

These three chips will be used to provide, initially on laptops, five different graphics cards. The Intel A370M will be the high-end graphics chip in the high-end range, offering 8 Xe cores and 8 ray tracing units, with 4 GB GDDR6 memory. The Intel A350 will use six Xe cores and ray tracing units, all with 4 GB of RAM. These chips will be able to be configured with a TDP between 25 and 35W, so they will be found, most likely in light and thin laptops, with low power consumption.

Read:  What the new Windows 11 Task Manager will look like. PHOTO

Intel promises for the A370M better performance than the Iris Xe chips integrated in the 12th generation of Core processors for laptops, but not extremely good. The target for this chip is 1080p resolution gaming at average settings at 60 frames per second or over 90 FPS in eSports games. Even though the A370M chip will also use the XMX AI Engine, the equivalent of Tensor Cores on RTX graphics cards, which allows the use of XeSS, the DLSS-competing solution for increasing resolution through AI processing, this feature will only be available in the summer.

In fact, the rest of the Intel Arc series of laptops will be launched at the same time, along with the first desktop solutions.

Arc is the first series of AV1 encoded video cards

Intel Arc 5 will be used for an average GPU, A550M, with 16 Xe cores and 16 ray tracing units with 8 GB GDDR6 memory, ie it will offer performance and memory double compared to Intel Arc 3 A370M. Of course, the Intel Arc 7, the most powerful chip, will allow you to double the performance of the Arc 5 and performance 4 times higher than the A370M. The A770M will use 32 cores and RT units, with 16 GB of RAM, while there will also be a version that falls between it and the Arc 5: A730M with 24 cores / units of RT and 12 GB of RAM.

Read:  Why the military "listens" to the Stinger rocket tube before launch While RT and core performance are very important in gaming, all Intel Arc graphics cards will include the same media engine. It is used in video editing and streaming applications to encode and decode modern video formats in real time, including the new AV1. This is a first in the PC area, as no other GPU or CPU can do real-time encoding on this codec. Basically, if there is support for AV1 on Twitch or YouTube, you will be able to use the same tape to stream live quality at a much higher quality.

Media Engine can also be used in Hyper Encode, which combines the power of the Intel processor with that of the Arc graphics chip for up to 60% improvement in video rendering. The first Intel partners to launch laptops with Intel Arc A3 video cards are Samsung, ASUS, Lenovo, HP and Acer. The first desktop graphics card will be released in the summer and will be called Intel ARC Limited Edition, probably a “founders edition” style version built by Intel. Certainly, other partners will also bring these chip-based solutions to market separately.