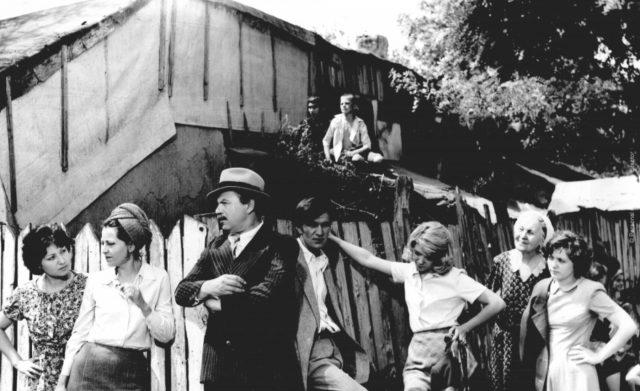 Despite the fact that our country was under communist occupation for about 50 years, films – many films – were made here, as in any other corner of the world. Some good, some not so good, but most of them accepted by the public.

And if, at that time, the behind-the-scenes stories were harder to find out after years, here they are coming out now that the information is legal. Some sad, some defiant of common sense, but most funny and nostalgic, as is only natural. Such is the case with today’s story, which centres on the film Bariera (1972), directed by Mircea Mureșan, and Dincolo de Barieră (1965), directed by Francisc Munteanu.

Film that a cinematic depiction of the slums of yesteryear. Little Paris on the outskirts

Director Mircea Mureșan was known for the way he chose to depict the Bucharest of yesteryear. In fact, during the communist period there was little talk of slums, the authorities preferring to depict society in cinema as modern, hard-working and, above all, by no means poor.

“Mureșan has succeeded in reconstructing the poetic sense of a world, in giving a more real image of the Bucharest suburbs of those years, of the people who lived there… The people in “Bariera” are not terrorized by misery, they are not victims of misery and they do not have, as in so many other films, the nostalgia of the center. They don’t want to belong, they want to be free… The underworld, the thieves, the prostitutes, is seen for what it is bureaucratic, it is not idealized according to an old habit of the seventh art… Because the darkness is not only shabby, but also monotonous. The only vast world is the world of candor… I have never idealized darkness and I have endeavoured to show that darkness, a form of atrocious contradiction, of gathered frustrations, is somehow worthy of our sacred pity. There is nothing to envy in darkness…”, Teodor Mazilu, author of the novel of the same name, confessed in the December 1972 issue of Cinema magazine.

The author of the novel knew the world of the Bucharest slums extremely well. “Mazilu knew the suburbs well, it was the world of his childhood, which he captured from a personal angle, different from other prose, such as, for example, Eugen Barbu’s “Groapa” or the literature of George Mihail Zamfirescu, in the sense that he sought less the picturesque environment made up of down-trodden, bourfași, horse thieves. But apart from them and the petty bourgeoisie who dream of escaping “beyond the barrier”, the marginal neighbourhoods of Bucharest represented at the same time the working-class belt of the city, a social area in which Mazilu tried to make a section and, against all the material aspects, the poverty evident in the streets, courtyards, people’s houses, to discover the essential trait, dignity”, Mircea Mureșan said, according to adevarul.ro.

How Banica took a beating with a clothesline, in Beyond the Barrier

And, because at the beginning of the article I was telling you about those behind-the-scenes stories that you don’t find out from anywhere, Ion Dichiseanu once told, amused, about what happened to Ștefan Bănică, during the filming of Beyond the Barrier: “I remember that I had to film a scene in Buftea, at Vulpașin’s house. The character was returning home slapped by Nastasia. The sequence was like this: I looked in the mirror and felt sick at myself, a character like Vulpașin doesn’t let himself be slapped, much less by a woman. I was nervous, I couldn’t find my place on the set.

Francisc Munteanu said to me: “Slap yourself, put your head in the mirror, it’s like putting a noose around your neck!”. After Francisc shouted “Motor!”, I leaned against the mirror with both hands and simply, without a word, smashed it with my head! I was young and restless, really living the role. Of course, Francis shouted “Stop!” and that’s how it stayed, there was no more take. The film was very truthful. Another scene starred Ștefan Bănică and Anna Széles.

He rapes her on a maidan, then slaps her. Vulpașin didn’t take kindly to a woman being hit, so I beat up Bănică with a clothesline. Funny thing is, Banica was screaming, I was kicking hard, because the director told me to. And they did one take, because Bănică couldn’t take it anymore!”, said the actor, according to the source quoted above.