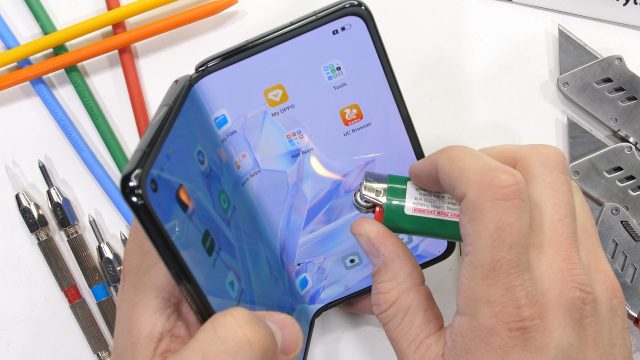 Samsung demonstrated in 2021 that foldable phones can also be durable, offering IP68 certification for the first time for Galaxy Z Fold3 and Z Flip 3. Foldable models in the past were especially vulnerable to dust, which could reach the hinge, which is irreversibly affecting each opening of the device. It seems that Oppo has learned these lessons from Samsung, as the Oppo Find N, its first foldable device, seems to last as well as the Galaxy variants. Unfortunately, it has the same vulnerabilities.

Oppo Find N was officially unveiled in December and looks set to arrive in Europe in the near future. The phone takes the formula popularized by Samsung and tries to improve it by reducing the size for the inner folding screen, but also by widening the outer screen. As a result, the user experience is a bit more “normal” on the outside screen and less complicated on the inside.

However, in terms of resilience, there are still some concerns. First of all, the inner screen is still covered in plastic, which can be scratched from any more “brutal” interaction. Even the user’s fingernail can scratch the screen, and the foil on top of the OLED panel doesn’t seem to be one you can change at home. Oppo says it has a layer of ultra-thin glass (UTG) under the plastic wrap, but this will ensure resistance to shocks, not scratches.

Fortunately, the phone seems to be made of durable materials, otherwise. We are talking about Gorilla Glass Victus glass on the outside and metal all around. In fact, the two sides of the folding screen close without leaving a space between them, which can be an advantage but also a disadvantage. If dust particles or other objects that can cause damage to the screen are caught in the middle, they will not be able to come out until the foldable screen is opened.

However, the dust test is very promising, as it does not seem to affect the moving elements of the phone. The hinge worked just as well after encountering a handful of dust and pebbles in the JerryRigEverything tests.

If you were planning to buy an Oppo Find N once it arrives in Romania, maybe now you will be able to be more calm about its resistance to daily use.