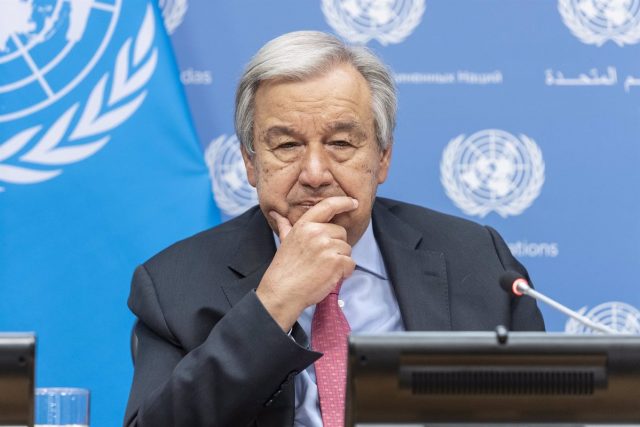 United Nations Secretary-General António Guterres warned Friday in Hiroshima that “humanity is playing with a loaded gun” in the face of a new arms race.

“It is totally unacceptable for nuclear weapons states to admit the possibility of nuclear war. Humanity is playing with a loaded gun,” Guterres has warned on the 77th anniversary of the atomic bombing of Hiroshima in Japan.

Moreover, in the publication he has added that it is necessary to “act in their memory and erase nuclear weapons from the face of the earth once and for all.”

The head of the UN considered that “nuclear weapons make no sense”: “We must ask ourselves what we have learned from the mushroom cloud that rose over this city in 1945,” he said, according to a UN press release.

Guterres lamented the bombing of Japanese territory in World War II. He also reflected on the geopolitical tensions during the Cold War due to the “terrifying threats that put humanity a few minutes away from annihilation”.

In turn, he has warned that world leaders are spending huge amounts of money to increase nuclear weapons arsenals with the consequent acceleration of a new arms race.

“Crises with serious nuclear overtones are spreading rapidly, from the Middle East to the Korean Peninsula to the Russian invasion of Ukraine,” he criticized.

Read:  Petro calls for improved security: "Colombia cannot be the country of massacres".

Despite warnings of the possible consequences of the current geopolitical instability, the secretary general said he saw “signs of hope.”

“Today, from this sacred space, I call on the members of this Treaty to work urgently to eliminate the arsenals that threaten our future,” urged Guterres.