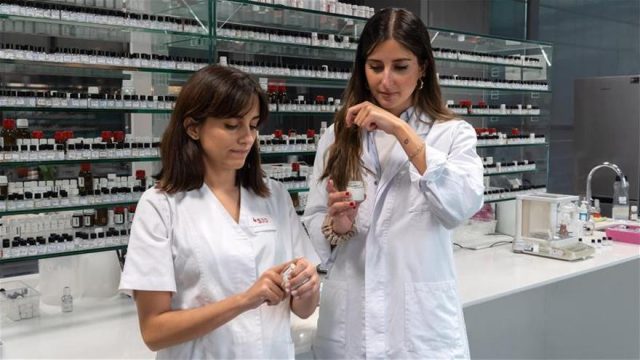 Beatriz Mínguez is a young pediatrician working in the Gastroenterology, Hepatology and Nutrition Service of the Hospital Sant Joan de Déu in Barcelona. She is one of the protagonists of this story that will change the lives of people suffering from fish smell syndrome.. In fact, it has already changed the lives of several of his patients, two children, and a few volunteers – a teenager and three adults – who two summers ago signed up for a pioneering and collaborative project between the aforementioned hospital center. and the multinational perfume company Eurofragance, present in more than 60 countries.

“Coincidentally I was covering for a colleague’s sick leave last year and these patients came to me, ages 3 and 7. When they came out of the nutrition office they left a lot of fishy smell in the room. The parents’ biggest concern was that odor and its social consequences. I told them to try with essences, but the result was terrible because the smells were mixed and it was even worse,” recalls the doctor, who explains that, after reviewing the scientific literature, she also found no other option apart from the use of antibiotics or the low choline diet [con restricción de pescado, legumbres y huevos] they were already using.

“Then I asked a friend of mine for help. I was very heavy-handed,” Mínguez stresses. Her friend is Magdalena Reya technical perfumer at Eurofragance, opened the doors of a company that was unaware of the existence of this medical problem and immediately got down to work. “It was our way of helping these people to get back to a normal life, because this problem is a problem that we have to face. It affects them very much on a psychological level, it isolates them and generates anxiety and depression.“Stéphanie Marze, the company’s communications director, points out.

Read:  Doctors warn of fatal mix of poly-drug use and mental fragility

The fish odor syndrome is a rare condition suffered by people with primary carnitine deficiency (1/20,000 – 1/70,000 people in Europe), which results in these patients not being able to process long-chain fatty acids into energy. It also happens to people with trimethylaminuriaa genetic and metabolic condition (with an estimated incidence of heterozygous carriers between 0.5% and 11%), with no cure, in which the body is unable to process certain nitrogen-containing compounds, such as trimethylamine, resulting in the characteristic stench.

The hospital and the company had not worked together before, and, according to Mínguez, “such a collaboration between the healthcare and perfume sectors is unusual.” Now, anyone afflicted by this problem can sign up for this project. which has had such good results. *[al final de este reportaje encontrarán un correo donde pueden apuntarse].

No cure has been found, but a solution has been found for these patients.. “At first, we started a little bit by instinct,” says Rey, “testing with materials that we thought could neutralize the bad odor. We know how to counteract odor in a room, but on the skin it’s different and we had never tried it.”

This is how the perfumer explains the process: “We bought pure trimethylamine, we made the solution that could be similar to the power that we perceived the children were giving off. And in a closed container we simulated what the child could evaporate for about eight hours, the daily time he is usually away from home. We put it in a closed container with the lotion at the dose of this raw material, and then we smelled it at one hour, three hours and eight hours.”

With this trial-error test was given with a “synergy” In which the fishy odor does not disappear, but it is not perceived. “We use citrus noteswhich help block the fish odor receptor in your nose. The idea is to make the perfume be perceived before the stench,” Rey sums up. So whoever gets there first, wins.

Read:  Study estimates direct costs of mental illness to be 30% higher by 2025

His partner David Mallo explains how they thought about the type of fragrance: “Since these are pediatric and adolescent patients, the key was to achieve a fragrance in line with their age in order to increase their acceptance and that of their environment. For the younger ones, we were inspired by a concept ‘eau de cologne’ fresh. For teenagers, a chord has been designed ‘Green Tea’.fresh, unisex and easy to wear at any age”.

Specifically, they have developed a body lotion in cream with 1% fragrance, an ‘eau de toilette’. with 5% fragrance and a body serum with 2% fragrance. With the latter, greater fragrance retention and good moisturization is achieved, in addition to ease of application.

Each set of products – which are currently produced in conjunction with the hospital’s Pharmacy Service – contains the same fragrance applied to give consistency to the effect of the perfume. To increase their effectiveness, patients are asked to use neutral gels and shampoos, preferably unscented. and the total elimination of other additional cosmetic products that could interfere with the results.

“It is cosmetic, over the hours it leaves the skin, but it can be reapplied as many times as necessary,” says the pediatrician, who has received “a million thanks” from her patients.

Mínguez recalls that it is are still looking for volunteers in which to test the effectiveness of the products, and that all those affected can get in touch via the following email: [email protected].