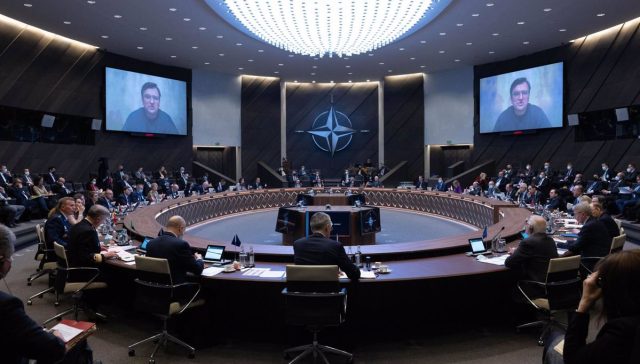 General view of a meeting of NATO foreign ministers during a speech by Ukrainian Foreign Minister Dimitro Kuleba. – -/NATO/dpa

The ambassadors of Finland and Sweden in Spain, Sari Rautio and Teppo Tauriainen, respectively, have not ruled out this Wednesday an eventual accession of their countries to NATO, given the security scenario resulting from the Russian invasion of Ukraine and despite warnings from Moscow.

Rautio and Tauriainen have admitted in a meeting with the media at the Swedish Embassy in Madrid that public opinion support for joining the Alliance has increased in both States and have pointed out that some Finnish and Swedish political parties already they have positioned themselves in favor of membership.

“In the polls, support for joining NATO has grown,” said the Finnish ambassador, who also pointed to a certain “movement” among the country’s political parties. In this sense, she has clarified that the Finnish conservative parties have been more “open” to this position, while on the left there is less support for this issue.

Although he has specified that “he cannot cite” parliamentary surveys that shed light on the issue, he has asserted that “there is momentum for a more positive position among the membership.”

Tauriainen has expressed himself along the same lines and has revealed that Swedish public opinion has increased support for possible accession to NATO, but has admitted that there are differences within the country’s politics. Thus, she explained that the Government has launched a “working group” with opposition parties to analyze the security and defense situation and the conservative parties have already advanced their intention to deal with the matter.

“The conservatives have said that if they win the elections in September they are going to propose that Sweden request entry into NATO, if there is a majority in Parliament,” Tauriainen indicated, who nevertheless clarified that the Government has already expressed its intention to follow “the line” followed in recent years.

Read:  At least 23 dead, most of them farmers, when a boat capsizes in central Sudan

“The opposition says that we have to have the option (…) there is a debate and there are other parties that are against it,” he added, before asking to see “how the working group evolves” and asserting that the campaign for the September elections “may influence” positions.

The Finnish prime minister, Sanna Marin, has already made it known that the invasion “would change the meaning of the debate” about her country’s accession to the Alliance, while the Swedish ‘premier’, Magdalena Andersson, has already positioned herself against this option because it would generate more tension in Europe.

In this context, the Russian Foreign Ministry warned Finland and Sweden that their accession to NATO would entail “serious political-military repercussions” that would require a Russian “response”, one day after the beginning of the invasion of Ukraine.

Both Rautio and Tauriainen, who have highlighted their cooperation with the Alliance, have agreed this Wednesday to minimize Russian warnings. The Finnish ambassador has recalled that these “threats” are not new and “have heard them several times.” “It is clear that they would not like us to be part of NATO, the message is not different, what has changed is the security environment,” she specified.

The Swedish ambassador, for his part, has called Moscow’s warnings “unacceptable”, but has pointed out that Stockholm “is not interested in these comments” and they should be “the ones who decide how to organize their defense”.

COUNTRIES THAT ARE NOT NEUTRAL

In this sense, the ambassadors of Finland and Sweden have recalled that their countries are not neutral, since their membership of the European Union (EU) prevents them from remaining on the sidelines of what happens to the rest of the Member States.

“We are not neutral countries, that is very important, an EU member country cannot be neutral because it is part of the EU family”, defended Rautio, who clarified that “being aligned militarily is another thing”.

This is how Tauriainen has also expressed himself, who has indicated that Stockholm’s position “has changed” since joining the EU. “Our position has evolved and 20 years ago we left neutrality (…) but we follow the policy of non-alignment,” he asserted, stressing that his purpose is to “create security” with his neighboring and friendly countries.

Rautio and Tauriainen have also referred to the increase in defense spending in Helsinki and Stockholm and have pointed out that they comply with the contribution of 2 percent of GDP for military spending, the commitment required by NATO.

The EU Heads of State and Government agreed at the beginning of March to “substantially” increase military spending to deal with the new security reality posed by the Russian invasion of Ukraine, with a mention of the mutual defense clause that includes the EU treaty, at the request of Sweden and Finland, which are not members of NATO.

According to the Finnish ambassador, Finland spends 1.7 percent of its GDP on defense, but with the decision in December to buy more fighters, the 2 percent limit will be exceeded. As for the Swedish ambassador, she has indicated that Andersson has already announced his intention to reach 2 percent, since 1.26 percent is currently earmarked.

Finally, Rautio and Tauriainen have alluded to the support that their countries have given to Ukraine, since both have taken the “extraordinary” decision to supply arms to kyiv in the face of the Russian military offensive.

Rautio has argued that Helsinki seeks to “support in every way” Ukraine, especially with aid channeled through the EU, but also bilaterally. The “extraordinary” step of supplying defensive and offensive weapons is because the situation is also “extraordinary.”

Tauriainen has highlighted the “historic” decision to supply weapons, in this case defensive, and has stressed that Stockholm has not sent weapons to countries at war since 1939. It is “helmets, protective clothing or food for soldiers” and has maintained that, in addition, Sweden maintains a “close cooperation” with kyiv that includes several projects “to help Ukraine create a new society as an independent country”.