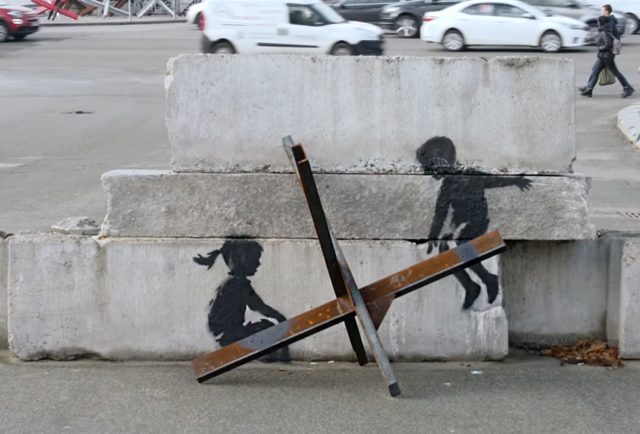 One of the world’s most popular artists known for his street art, Banksy has been among the ruins of Ukraine to make his mark. Find out how he taunts Vladimir Putin.

One mural depicted a man resembling Russian President Vladimir Putin being thrown to the floor during a judo match with a boy. Another, shows two children using a metal war barrier as a seesaw.

Read:  David Beckham Saves the Team, the series designed to delight Manchester United fans: when you see it on Disney+

However, the mural Banksy used to reveal his presence in the country is of a gymnast balancing on the rubble of a damaged building. The Bristol-based artist, whose work sells for millions of pounds, posted three images of the mural on Instagram on Friday, with a very simple description: “Borodyanka, Ukraine”.

The famous Banksy leaves his mark on the ruins of Ukraine

Borodianka is a town northwest of Kiev that was hit by Russian bombs early in the invasion. Russian troops from the Belarusian border 200 miles to the north occupied the town in February. Along with Bucha, Irpin and Hostomel, Borodianka was one of the towns hardest hit by Russian shelling.

Read:  End of era for Citroen: The latest C1 model has been manufactured

Subsequently, the town of Borodianka was liberated in April. Ukrainian investigators found dozens of mass graves in which the bodies of tortured and murdered civilians were buried.

Moscow unleashed cluster munitions and powerful unexploded bombs in populated areas of Borodianka, destroying dozens of buildings, some of which were effectively torn in two. Since then, the town has been the focus of reconstruction efforts, with several tower blocks demolished as a result of the damage caused by the fighting.