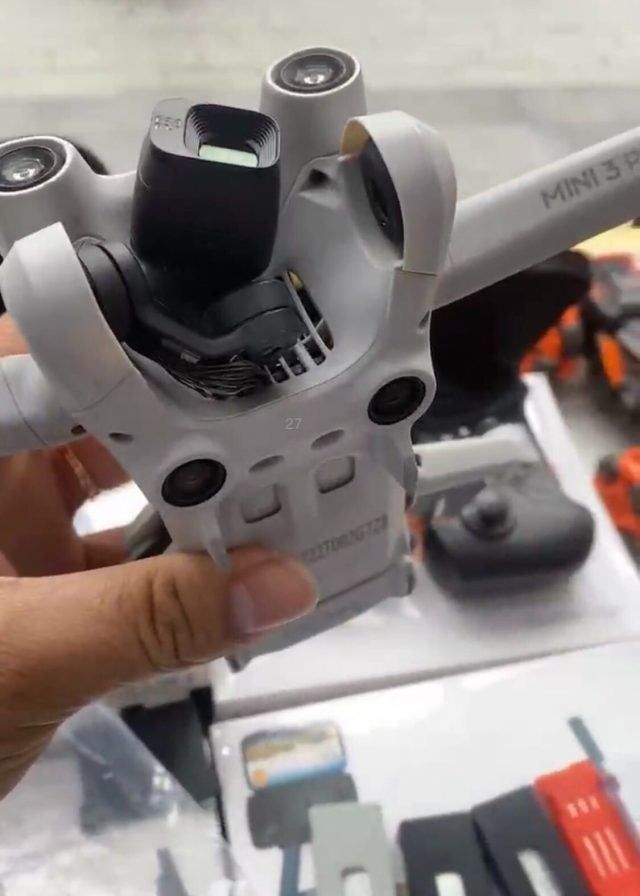 The DJI Mini and Mini 2 drones managed to impress at the time of launch both by their small size and weight below certain limits, which allow them to operate almost anywhere, but also by the low prices, which made the drone flight accessible to many users. However, it seems that the next model of the series, DJI Mini 3 Pro, will increase a little in price, but also in capabilities, approaching the specifications of the superior models, but keeping the dimensions small.

In the past, other DJI products went online before the official announcement, and some even went on sale before launch, so the new images featuring the DJI Mini 3 Pro drone could be real. They appeared on the Twitter account of Jasper Ellens, an “investigator” of the DJI company, who has published such information in the past.

He posted the images along with some details about the drone’s specifications. DJI Mini 3 Pro will keep the design compact and will remain a light drone, under 250 grams. It will now integrate a three-axis gimbal and use a larger 2,453 mAh battery (compared to 2,250 mAh). The camera will also be enhanced with a lens equivalent to a 24mm full frame focal length with f / 1.7 aperture (compared to f / 2.8). This should ensure better images in low light.

This is the new #DJI # Mini3Pro. It has a bigger 2453 mAh battery. Improved 3-axis gimbal and camera E24 F1.7. Huge front and ground sensors and… new backwards sensors. Weight: 249g. Time to sell your Mini 2. I expect an announcement in a few weeks. pic.twitter.com/CvW9YfmkRg

But the most important upgrade of the drone will be the proximity sensor system. DJI Mini 1 and 2 only used sensors at the bottom for landing assistance, but DJI Mini 3 will be equipped with a complete set, which will most likely provide obstacle assistance: two larger sensors at the bottom. below, two front sensors and two rear sensors will ensure that the drone can detect hazards and stop or bypass them in flight. This could also ensure the presence of the “Active Track” function, which is absent from the current Mini drones, which allows automatic tracking of a subject.

What we don’t know yet about DJI Mini 3 Pro is the price, which could increase considerably, and its filming capabilities. Mini 2 is already shooting at 4K at 30 frames per second, so it may be upgraded to 4K 60, or 5.7K 30, also the “Pro” name might suggest “log” shooting for advanced coloring. in post production. Meanwhile, DJI has also begun offering OccuSync 3.0 on its more advanced drones, a higher-quality wireless control and video transmission system.

Read:  Google will add native support for AirTag and other abusive bluetooth trackers

The official announcement is expected in the next few weeks.