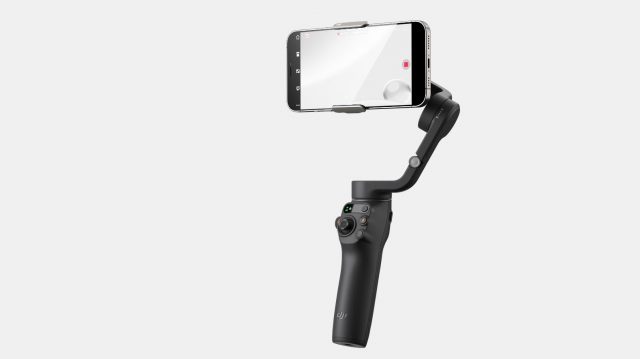 After a new FPV drone and a new action camera, DJI has another release for this fall. As we’ve become accustomed to over the past few years, the Osmo Mobile series of smartphone gimbal stabilizers gets a new upgrade. The new Osmo Mobile 6 isn’t significantly different in design from the previous model, called the OM5, but it does come with a few new features and improvements that are sure to offer some creative new capabilities to those who prefer to shoot video or photography with their phone.

DJI’s Osmo Mobile 6 uses the same “slim” design of the previous model, which can be folded into a compact and lightweight form. So you can take the stabiliser with you more easily, without having to carry it in a dedicated case that would take up extra space. The mount hasn’t changed significantly between the last few generations, and is still magnet-based, but there are now new features, especially for iPhone users.

For example, the stabiliser can now automatically detect when the phone is magnetically mounted, thus automatically starting the DJI Mimo app for photo and video capture. While the shape of the device hasn’t changed much, it has received a few improvements. First, a wheel appears on the left side, which can be used in two ways. Either for fluid zooming, which transitions between the phone’s two or three cameras, or for manual ‘follow focus’, like dedicated video cameras. What’s more, the new stabiliser is compatible with ActiveTrack 5.0, the same technology used on DJI drones, which can track the subject. Also new is the LED indicator panel, which quickly shows you which stabilisation mode you’re using the gimbal in.

The motors are now more powerful, able to support devices up to 290 grams, and the magnets are stronger to ensure a better grip on the mount. Like the OM5, the Osmo Mobile 6 also extends via a telescopic arm. The standard pack for the DJI Osmo Mobile 6 includes the stabilizer, a charging cable, carrying pouch, magnetic phone mount and tripod, and starts at €170, the same as last year’s DJI OM5. The company will also keep the OM5 on offer at €129, as well as a cheaper model, the DJI OM4 SE, based on the original OM4 design, at €99.