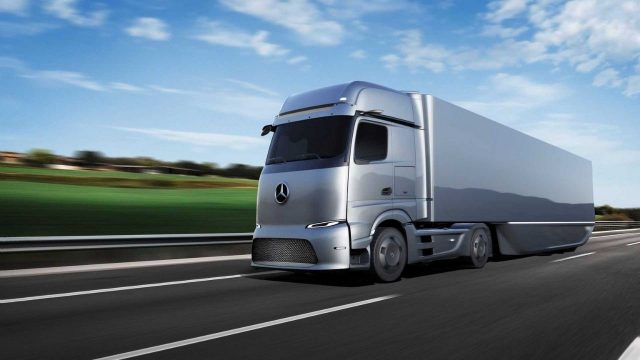 Daimler Truck has built the first prototypes of the eActros LongHaul battery-powered long-distance truck and plans to test them on public roads this year.

In addition, the truck manufacturer has announced new variants of eActros for distribution transport.

To differentiate: eActros is a high-capacity electric truck for distribution transport, which was delivered at the end of February 2022. Visually, this model is indistinguishable from the familiar Actros with diesel engine.

Daimler Trucks has offered a first preview of the eActros LongHaul with a streamlined front in September 2020. The 40-ton electric truck for the long haul segment will be ready for series production in 2024, with a range of approximately 500 kilometers.

These vehicles are currently undergoing initial testing and are to be tested on public roads by the end of the year. However, Daimler Truck does not publish current images of the new prototypes – only the rendering that has been known for almost a year and a half. So it remains to be seen if there will be any changes to the concept presented in 2020. There are also no additional details about the e-drive and battery.

Read:  Polestar is preparing its first SUV: when Polestar 3 will be launched

The first prototypes of this model were built

The manufacturer still remembers the details of the other variants of eActros. Daimler Truck only announces that “additional versions of eActros” are being prepared. So there will probably be more options besides eActros 300 and eActros 400. The two variants available so far differ in terms of battery: 300 has three batteries with 112 kWh gross (97 kWh net), 400 has four. Each module offers a standard range of approximately 100 kilometers. Daimler Truck does not specify how the new variants will differ from the two known versions.

What is clear, however, is that eActros is equipped with the second generation of MirrorCam from April. This should improve the display and security, as “MirrorCam’s perspective is now even more similar to that of the familiar glass mirror.” The second generation can be recognized by the arms of the camera, which are about ten centimeters shorter.

There is also two news about eEconic: the electric battery truck for municipal use will be exhibited for the first time at a trade fair these days at IFAT, the world’s largest trade fair for water, sewerage, waste and raw material management, at Munich.

The start of series production is scheduled for July 2022, according to the press release.