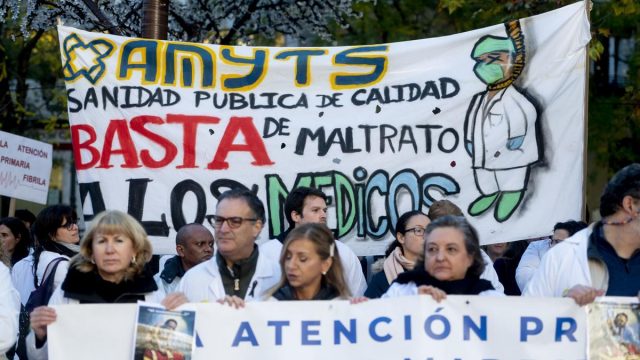 The demonstration by healthcare workers against the healthcare management of the president of the Community of Madrid, Isabel Díaz Ayuso, followed by the strike called by the Metges de Catalunya union for the end of January, have put public healthcare at the center of the debate. Neither of the two healthcare systems leads the rankings in terms of investment, personnel or waiting lists. In fact, these two territories have the highest proportion of people affiliated to a private mutual insurance company: 38% in Madrid and 33% in Catalonia, compared to the state average of 24%, according to data from the employers’ association Unespa (Unión Española de Entidades Aseguradoras y Reaseguradoras) obtained by Verificat.

Catalonia outperforms Madrid in all healthcare spending indicators, although, in most cases, both communities are at the bottom of the regional ranking and below the state average. Even so, Madrid has more medical personnel per inhabitant, but fewer beds, operating theaters and day care centers. In terms of waiting lists, in Catalonia it takes more or less twice as long to get an appointment for surgery as in Madrid.

According to the consolidated figure for real spending, Catalonia allocated 6.3% of its GDP to healthcare, compared to 4.7% for Madrid in 2020, the last year for which data is available, according to the Public Health Expenditure Statistics (EGSP) published by the Ministry of Health. These are the two autonomous communities that allocate the lowest percentage of their GDP to public healthcare, both below the state average (6.9%). Calculating per capita, Catalonia is in the middle of the list, with 1,760 euros per inhabitant, some 120 above the average. Madrid occupies the penultimate position (1,491 euros per person). Focusing only on primary care, Catalonia is also ahead: 226 euros per capita compared to 158 in Madrid.

Read:  these are the antibiotics that have been withdrawn by the Health Ministry

But Catalonia has reduced primary care spending more than Madrid since the 2008 economic crisis erupted, according to EGSP data. In 2020, the Catalan administration spent 5.2% less than in 2009, while Madrid’s decline was 1.6%.

Closer to the state average is the number of medical personnel. In Catalonia there are 3.4 professionals per 1,000 inhabitants, a figure that Madrid exceeds by three tenths of a percentage point.. Both communities are around the national average (3.5), as indicated by data from the Ministry of Health for 2021. In terms of nursing personnel, the two communities tie at 4.3 professionals per 1,000 inhabitants, two tenths below the average.

In terms of primary care staff, Catalonia slightly outperforms Madrid (0.73 physicians per 1,000 people versus 0.68 in Madrid), but both are below the average of 0.77, according to the ministry’s statistical portal. More marked is the lack of primary nursing staff in the Community of Madrid: 0.51 per 1,000 people, below Catalonia’s 0.68 and the state average of 0.66.

Read:  The Ikea ice cream cake that has been recalled due to the presence of metal

Another of the classic indicators for assessing the quality of the public health system are the available hospital beds. In 2020, in Catalonia there were 3.83 beds per 1,000 inhabitants in operation, leading the regional ranking and well above the 2.73 in Madrid.

Beyond the resources of both health systems, the statistic that is probably most present in the lives of citizens is the waiting time to get an appointment at the health center, to see a specialist or to enter the operating room. And here, Catalonia is far behind Madrid. On average, it is necessary to wait almost three months to access a consultation, one month more than in Madrid, according to data from the Ministry of Health.