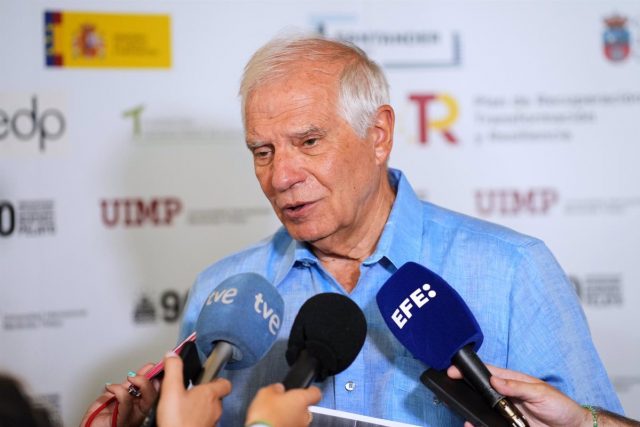 Latest news on the war between Russia and Ukraine

The High Representative for Foreign Policy of the European Union, Josep Borrell, has been positive this Tuesday about the possibility that the ministers of Defense of the Twenty-seven give the go-ahead to the creation of a European training mission to the soldiers of the Ukrainian Army.

“We have a rather complex procedure to identify objectives and purposes, dimensions (and) resources. But I hope that we will have political ‘green light’ for this mission,” Borrell said in Prague ahead of an informal meeting of EU defense ministers.

In this regard, he explained that, during this Tuesday, they will discuss the situation in Ukraine, especially the recent shelling around the Zaporiyia nuclear power plant. “We see the continuous indiscriminate shelling of civilians (and) atrocities against prisoners of war,” he has explained.

Read:  At least four injured after lightning strike within 10 meters of White House

Borrell has described Moscow’s nuclear game as “dangerous”, for which he has pointed out that Kiev needs support from the EU. “The Minister of Defense of Ukraine, (Oleksi Reznikov) will be with us. This for me is the most important part of the meeting,” he has said.

“How can we boost the European defense industry? How can we get member states to buy more equipment because we are running out of our stocks? We are providing so many capabilities to Ukraine that we have to refill our stockpile,” he has asked.

Although many details remain to be defined, such as fixing the base of operations, all in all, the idea is to pool the efforts already made separately by EU countries to provide military training to Ukrainian soldiers, who have been fighting the Russian invasion since February.

For Wednesday, when the informal meeting of foreign ministers will continue, the possible limitation of the visa policy for Russian citizens will be on the table, a point of particular interest to the Baltic countries, Poland or the Czech Republic, the host country and holder of the six-month presidency of the EU.