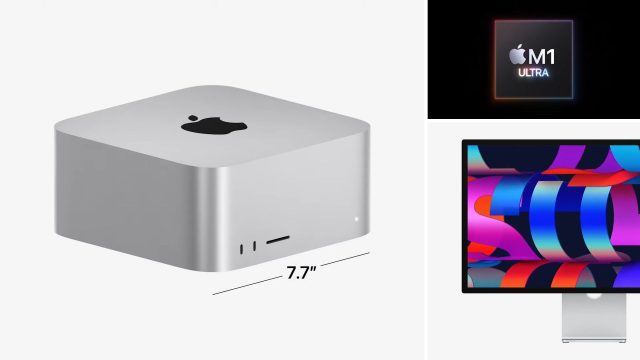 The upgrades for the iPhone and iPad models at the Peek Performance event were minor, but Apple came for the first time in a long time with an announcement for a new category of desktop computer from the “Mac” family. It’s called Mac Studio and wants to complement the offering of professional PCs, for those who need more performance than a Mac Mini or iMac can offer, but don’t want a big desktop like a Mac Pro. This is the company’s first computer to come with a new, even more powerful Apple Silicon processor: the M1 Ultra. Along with this model, I also came across a new Apple screen: Studio Display.

In fact, the M1 Ultra is not a very new processor, but a combination of two existing processors. Apple has integrated into the design of the M1 Max model, announced last year with the MacBook Pro series, a physical interface on the chip called Ultra Fusion with a bandwidth of 2.5TB / s. This allows the direct connection of two M1 Max processors to operate as a single processor. The operating system recognizes it as a stand-alone processor, and its performance is accessible in all applications immediately, without the need for special programming to access new kernels or extra memory. Composed of 2 M1 Max, the M1 Ultra comes with 20 CPU cores (16 high-performance and 4 efficient) and 64 GPU cores, with up to 128 GB of unified RAM for system and GPU. Apple says the new processor is made of 114 billion transistors, 7 times the 2020 M1 model. It also has the fastest memory on the market, with double the bandwidth of the M1 Max: 800 GB / s. Being 2 processors in one, you also have two neural processors, with 32 cores in total, as well as two media engines for video processing. Apple claims that you can simultaneously play 18 8K videos in ProRes 422 format on the M1 Ultra, being the only processor in the world that can ensure this level of performance.

The first computer to be equipped with the M1 Ultra will be Mac Studio, a new desktop PC from Apple, equipped with everything you need in a creative environment, says Apple. Thus, you have the option of the new processor, or to choose a model equipped with M1 Max, at half the performance. Models with the M1 Max come with 32 or 64 GB of unified RAM, while the M1 Ultra offers 64 or 128 GB of unified memory. Storage can go up to 8 TB, with an SSD with a speed of 7.4 GB / s. Everything is cooled using a two-turbine system, which should provide efficient and quiet cooling. Apple says that in most cases, you should not hear the fans.

The case occupies the same horizontal space as the Mac Mini and appears to be as tall as two Mac Mini cases. In terms of connectivity, however, it is by far the best equipped Mac model in recent years (even than the Mac Pro). We are talking about two Thunderbolt 4 USB-C ports on the front, as well as a full size SDXC card reader, along with another 4 Thunderbolt 4 USB-C on the back, Two USB-A, HDMI, and 10 Ethernet Gbps, plus an amplified 3.5mm “pro audio” jack. In terms of wireless, it comes with WiFi 6 and Bluetooth 5. Apple says you can connect up to four 6K Pro Display XDR monitors plus a 4K HDMI TV simultaneously on this model.

Compared to other Macs, both the M1 Max and the M1 Ultra are more powerful than some of the more powerful iMac and Mac Pro configurations. Both in CPU and GPU performance. Studio Display: a monitor with an integrated iPhone 13 processor

To complete the “Studio” offer, Apple has also launched a new monitor dedicated to this desktop computer, but which can be used without problems with other Macs with USB-C connector. It’s called Studio Display and comes with a 27 ”diagonal and 5K resolution. However, it is not HDR and only offers 600 nits brightness, with 10-bit color support, compatible with the DCI-P3 color space. Studio Display benefits from an anti-reflective treatment, but can also be configured with “nanoglass”, just like the XDR model. In addition to the “standard” option, which only tilts at 30 degrees, Apple offers a Studio Display that can be adjusted vertically, as well as a “VESA” version, which can be mounted on a stand.

What this display offers and I have not seen on any other monitor from the offer of Apple or other companies in recent years is a processor. Yes, Studio Display integrates an Apple A13 processor (the same one used on the iPhone 11 range), which is used to control the integrated 12 megapixel camcorder. It has an ultra-wide lens with Center Stage and 3 microphones for improved sound quality. The monitor is also equipped with a sound system similar to the one on the iMac, with six speakers (4 woofers and 2 tweeters), capable of playing Dolby Atmos sound. On the back, the Monitor also has three 10 Gbps USB-C ports, as well as a Thunderbolt 4 port, which can also provide 96W of power to charge a laptop. Apple says the new 14 “MacBook Pro can be quickly downloaded directly from this monitor.

Studio Display launches on March 18 at a starting price of $ 1,599. Nanoglass and other stand variants will be more expensive. I did not receive the announcement of new MacBook models at this event, nor the expected announcement for the M2 processor. However, Apple reminded that it has another model to update this year with Apple Silicon processors: the Mac Pro model. Details were promised during the event this year, without a date.