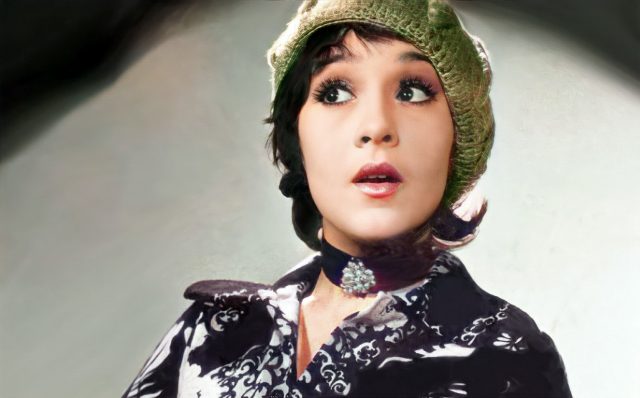 No matter how old you are, you’ve surely heard, at least by chance, “An orange” and maybe even happened to hum this song. It was sung by Anda Călugăreanu, an artist with a child’s voice that Romanians simply adored.

Anda Călugăreanu sang with “Sincron”, “Olimpic ’64”, “Sfinx”, “Roșu și negru” and, exceptionally, she was appreciated by several categories of public, which was not really within everyone’s reach. You simply couldn’t not love it.

Anda Călugăreanu sang, danced, acted in skits, but above all, she knew how to make herself loved by the public – it came naturally to her

Anca Miranda Călugăreanu, or simply, Anda Călugăreanu, as she was to be known and loved by her fans, was born in 1946, in Bucharest, and made her first appearance on stage at the age of 19, when she sang with the Sincron band at the Sala Palatului.

Later, over the years, she would collaborate for years with Cenaclul Flacăra, but also took the path of television.

She married Dan Tufaru and had countless collaborations with the late Florian Pittiș, and later, in the 1970s and 1980s, she was cast in television sketches that would bring her eternal recognition and public appreciation. She was beautiful, talented and exuded candour, a series of qualities that were highly appreciated at the time.

“- Always starting over, always something else… Don’t you feel the need to have a place of your own, in a team, to add up your experiences, to build a career as a theatre actress?

– A place, yes, but not just any place. A place of my own. Where I’m needed, not someone else. Otherwise, I have my own lane, which I walk alone.

– From where, this multipurpose endowment? Do you come from a family of artists?

– Not at all! My father was a career officer and didn’t have much of an eye for histrionic pursuits. My mother, on the other hand, was an exuberant nature, she loved theatre, she had a cult for Marietta Anca (a famous actress of the interwar period), and she even chose a name for me to evoke her, which seems a bit precious, Anca Miranda. Mircea Crișan baptised me on stage, in a variety show. He said: Anca Călugăreanu can’t be, it sounds bad, Anda it is, and Anda stayed. But I made my debut in the fifth grade, at Cantemir High School, I was the star of the magazine “Feerie in the Grass”, that’s when I had my first review. In fact, I started with ballet, from the age of four, I was Gigi Căciuleanu’s partner.

After nine years of ballet, my father said: “That’s it! You’re small and good-looking, you can’t become a ballerina, we’re giving money for nothing. In 1964 I took the exam at the Theatre Institute and failed. The diagnosis was “incongruity between physique and voice”, said Anda Călugăreanu, in an interview with Ilene Popovici in 1990, for Teatrul Azi magazine.

After her divorce from Dan Tufaru, the artist found happiness in the arms of her second husband, Alexandru Medeleanu.

The end of a symbol: Anda Călugăreanu dies at 45

In 1992, Anda Călugăreanu passed away, leaving a great void in the hearts of those who loved her for so many years. It all happened after her return home from a tour in Israel.

“She was due to leave in early April on a tour of Israel. He was always suffering from a cold, embarrassed to breathe, couldn’t stand cigarette smoke. He worked terribly hard, working at the theatre, working at home. She cooked, washed, ironed, mended, and she loved doing all this because she did it perfectly, with a love and dedication that only she could do. But then she was tired, and she blamed her indisposition on fatigue. She told me so many times: God, how I wish I would never go to Israel again, though she knew what joy it gave her to see the world. And yet she went, because Anda never looked back.

When she came back, she phoned me and told me she probably had pneumonia. I had gotten sick then, too, and I playfully bet that she would get better before I did. How awful it was when I was getting better and better, and she…

How naive we all were to think Anda didn’t know what was wrong with her! What a terrible feeling I have now, when I realize that pity and love for those close to her made her hide her pain! We were trying to fool her (after the results of the tests had clearly proved that it was cancer) that it was something temporary and she pretended to believe us and joked with us, laughed… How much pain there could be in that laughter!

She played her part perfectly to the end although, with all that terrible suffering, faith in God still gave her hope in a miracle. (…) She called her husband (Alexandru Medeleanu, her second husband) and her daughter, Ioana, and with fantastic power she communicated her last wishes to them. She said to be dressed in her most beloved stage costume, to wear her white shawl around her neck… and her body to be laid in Bellu, among the artists. She fell asleep with the candle in her hand, in the arms of the husband she loved so much, at peace with God and the world, and beautiful, as she wanted to be until her last hour.

Read:  HBO Max has "changed its face": what the streaming platform now looks like

Not 20,000 people passed the body of Anda Călugăreanu on her last journey. 200,000 people, at least, came to bid her farewell and pay their last respects from Monday morning until noon on Tuesday at St. Sylvester’s Church. Simple people, children, young and old on crutches from Bucharest and all over the country came, because she sang to them and made their lives beautiful through her laughter and play. And they, the simple people and the children she loved with a love that only she was capable of, came to offer her their last flowers, their last words of love.

Who can imagine a cemetery, as big as Bellu, shaken by sobs? At least a hundred thousand people strewed her path with flowers… And everyone, young or old, wondered why Anda Călugăreanu had to leave… But God knows his laws better than we do. It was to be. Perhaps it had to be. From up there, near the Star she was heading for, Anda now knew everything, and the tear that was dripping down her cheek was perhaps the last sign of gratitude for the immense love people had for her. Or of pity for so much suffering that she had unwittingly caused”, wrote Monica Tripon, a friend of the artist, in a testimonial published in Adevărul de Cluj, immediately after her funeral.

The artist was 45 years old when she died, but she left behind her a real collection of sketches, songs and television images that have remained forever imprinted in the collective memory of Romanians. It can be said that Anda Călugăreanu became a “cult” artist in our country. Today, a street in Bucharest bears her name.

Perhaps one of her most representative and funny performances is this one, from 1985, with Dem Rădulescu.