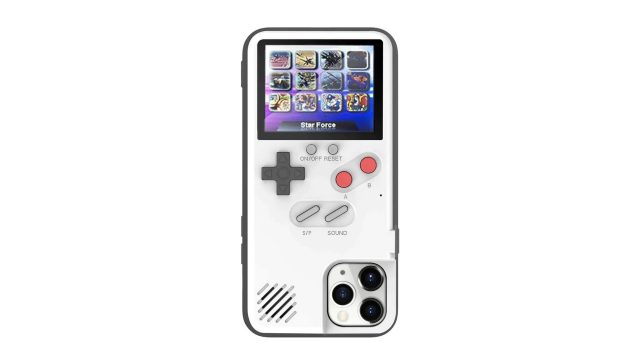 Ever since phone cases became popular, there have been a few that included prints that made the phone look like classic handheld consoles, like Nintendo’s Game Boy from the 1990s. Now, a new Chinese-made phone case wants to put a functional Game Boy on the back of Gameboy Case phones made specifically for Samsung and Apple phones.

Basically, instead of putting a print on the back of the phone, The Case Universe decided to integrate an entire gaming system, complete with buttons, color LCD screen and even a speaker for sound playback. The result is clearly inspired by the classic Gameboy, but it doesn’t play handheld games, but NES (Nintendo Entertainment System) games like Donkey Kong, Super Mario Bros., Pac-Man, Galaga or Bomberman.

The console case comes with 36 pre-installed games, includes an internal battery that can be charged via a micro-USB port, and promises up to 6 hours of gaming time.

Read:  Meta Quest 2 gets expensive 2 years after launch without a hardware upgrade

The list of compatible phones is quite long, offering support for all iPhone models from the iPhone 7 generation to the present and Samsung phones from the Galaxy Note10 to the latest Galaxy S22 models. However, it’s important to note that on Samsung, only Galaxy S and Note models are compatible, not the Galaxy A or Galaxy M budget series phones. The case also comes in multiple color variants, from the classic black and white, to pink, red or a special “Pink Panther” edition.

Read:  Epson accused of programming its printers to stop working after a certain amount of use The listed price is 178 lei, even cheaper than an “original” Samsung or Apple cover for their high-end phones, which are usually made of silicone and plastic or leather. The case shown here appears to be made entirely of hard plastic, which should offer reasonable protection in addition to the extra functionality.

However, this product is certainly not 100% legal. While game emulators are not illegal, distributing games without a license, as in this case, is not. Thus, it wouldn’t be entirely inconceivable for this product to suddenly disappear from the market once Nintendo or Bandai Namco representatives learn of its existence.