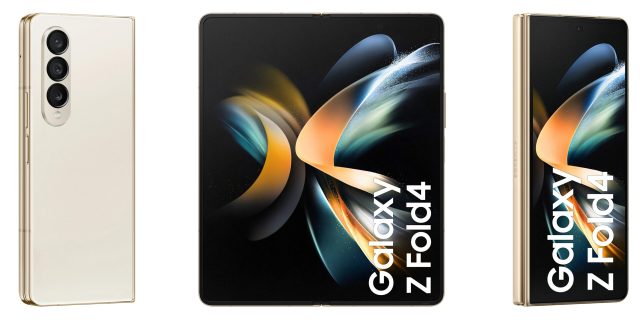 We’re about two weeks away from the launch of Samsung’s new Galaxy Z series foldable models, so it’s to be expected that we’ll see images of the devices from all angles. Rarely in this industry does a company manage to keep the design of its new devices a secret anymore, and we’re finding out what shades the Galaxy Z Fold4 and Flip4 models will be available in. What we can’t see in the new images though is a significant difference on the outside from the previous generation.

We weren’t expecting major design differences on the new Galaxy Z models, but new images released by 91mobiles suggest there are almost no differences. From the camera module, shape and even some color shades, the Fold4 and Flip4 models in these images look very similar to last year’s.

The Galaxy Z Fold4 is pictured in what appear to be the very official images, in shades of Beige (Beige), Black (Black) and Gray Green (Gray Green). Last year’s colors were called Phantom Black, Phantom Silver and Phantom Green. Another color that could be included on the new foldable series is Burgundy Red, the one in which the Galaxy S22 Ultra also shipped. The differences are minimal in construction, however, as the glass on the back still appears to be made with a matte texture and the camera module in an identical position with the same design as last year.

Read:  Instagram confirms login issues. Some users have been suspended for no reason

In the case of the Galaxy Z Flip4 we have four color options: beige, black, blue and purple. The phone retains the two-tone design of the case on the back, with the top, where the two cameras and outer screen are housed, covered by a black glass panel.

The launch event is scheduled for August 10, 2022, and the phones will most likely arrive in stores before the end of the month. Rumors suggest that the new foldable models will be priced slightly higher than last year’s models.