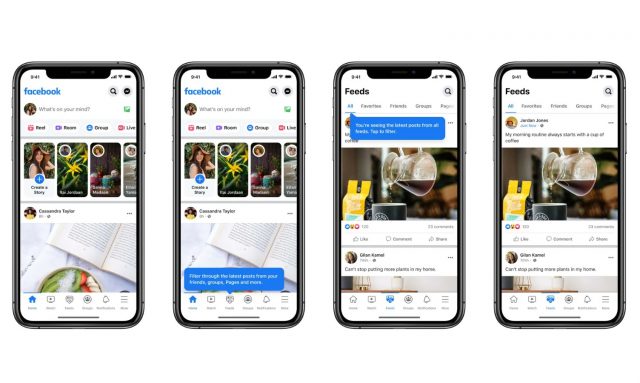 Facebook’s algorithm has come under the spotlight after the Cambridge Analytica scandal with each new election, as it is accused of influencing the voting decisions of the platform’s users. Many Facebook users have asked over the years for the ability to see a chronological feed of content from friends in their list, and now the network is offering just that, in the form of a new button in the mobile app called “Feeds.” It displays the latest posts from friends and groups you belong to, in reverse chronological order.

Facebook friends, pages and groups’ posts will appear in the Feeds tab

Those who were willing to dig through Facebook settings could also bring up a timeline feed in the standard News Feed, called “Most Recent”, but this was usually not kept when exiting the app, requiring access each time. Facebook now allows you to access a timeline feed directly from the bottom bar of the app, via the Feeds button.

According to the official announcement, made by Meta CEO Mark Zuckerberg himself, the content you’ll get via Feeds is strictly what friends in your list, followed pages and members of groups you’re part of have posted. So “Suggested for You” posts, which started appearing over the past few years based on interests Facebook thinks you have, will no longer be visible here.

The classic News Feed will now be renamed to “Home,” where Facebook delivers content to you based on a new algorithm, including suggestions for Reels and Stories, which were generally only shown at the top of the main menu. Somehow, the main “Home” menu becomes a source for “discovering” new content creators or content that’s popular on the social network based on your preferences, and Feeds is where you’ll see things you might be interested in from people or pages you choose to follow.

Of course, some of your friends’ posts might also appear in the Home tab, depending on how relevant the algorithm deems them to each individual user. Also, the Feeds tab won’t be completely ad-free, although it won’t suggest content like the old News Feed did.

Willy Rock - October 7, 2022 0
Members of the European Parliament have called for a "effective taxation"of crypto assets and to a "better use of the blockchain" to counter tax...