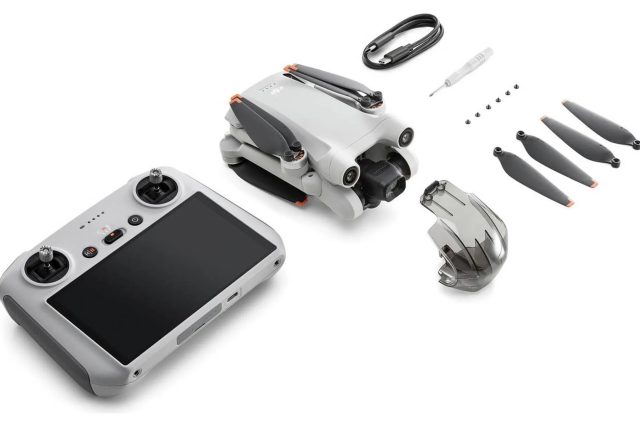 DJI Mini 3 Pro, the next small drone of the Chinese manufacturer, has not even been officially announced yet, but there are already unboxing clips for it and even a demonstration clip that proves that the images are real. These new images thus confirmed both the final design of the drone and its capabilities.

The new drone model from DJI will be delivered in several versions, at various price thresholds. The standard model, DJI Mini 3 Pro, will only be delivered with a drone, spare propellers and a “traditional” controller. However, the model presented in this unboxing is the one that includes the new DJI RC, a remote control that integrates a screen. Thus, the use of the smartphone is no longer required with this remote control. The DJI RC remote control also includes its own microSD card slot, which allows you to record the drone’s video signal in real time. This way, you always have a backup of your recorded material, even in the event of an accident that could lead to the loss or destruction of your drone.

DJI Mini 3 Pro adopts a different design, being now equipped with sensors in all directions. We have proximity sensors at the front, two rear-facing sensors, and two large sensors at the bottom. These will allow the drone to avoid obstacles automatically, unlike previous generations of DJI Mini, which did not benefit from such capabilities. Also, after launch, a firmware update will be released that will allow ActiveTrack capabilities, for automatic tracking of the subject.

All this will come at a higher price

The camera will be the biggest performance upgrade, however, using a much larger sensor and an improved gimbal, which provides three-axis stabilization. In fact, the camera can now be rotated 90 degrees, for portrait capture, for social media. Video recording capabilities will be significantly better, with 4K shooting at 60 frames per second, compared to 30 on Mini 2, with HDR capabilities.

Read:  That's why Samsung is giving up the "Z" in Galaxy Fold and Flip

The official announcement is expected in a few days, on May 10. However, the price for the DJI Mini 3 Pro and DJI RC package could jump to 1,000 euros, and the Fly More package will be available separately, with a charger for three batteries, two extra batteries and an extra propeller.