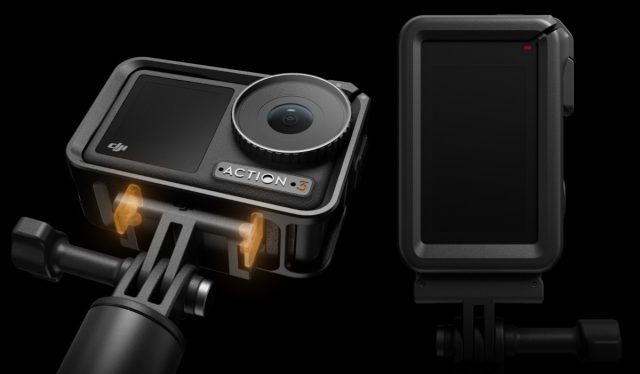 On the same day as GoPro, DJI announced its direct competitor, the Osmo Action 3. While the Action 2 version went in a modular direction, similar to the Insta360 One cameras, the new Action 3 comes with a similar design to the original Action, inspired more by GoPro. So we have an action camera with two screens, one on the front and one on the back, with a large lens on the front, but framed in a circle rather than a square, to differentiate it a little from the American brand’s cameras.

The DJI Osmo Action 3 boasts even higher specs than the GoPro Hero 11 Black in some respects. For example, its 1/1.7″ sensor is larger than the 1/1.9″ sensor. However, the shooting modes are a bit more modest. We’re capped at 4K 120 FPS on 16:9 and 4K 60 FPS on 4:3, as well as 1080p at 240 FPS. The RockSteady 3.0 stabilisation system works even at full resolution, however, but the HorizonSteady mode, which keeps the horizon straight all the time, drops the resolution to a maximum of 2.7K at 60 FPS. The advantage in this mode is that you can rotate the camera 360 degrees around the horizontal axis and the image remains straight.

Read:  Apple confirms it will adopt USB-C on iPhone

It seems DJI is trying to plunge on these stabilization features, as there is also a mode called Horizon Balancing, which works at 4K 60 FPS and keeps the horizon untilted up to a 45 degree rotation.

The only thing “inherited” from the Action 2 is the magnetic mount, with two clips for security. The design has been slightly improved so that it doesn’t come off as easily, and the camera comes bundled with an external pouch, which allows mounts to be attached to both the bottom and side for portrait-mode video shooting.

An upgrade from the Action 1 is the integration of a touchscreen on the front, previously this 1.4″ screen was for preview only, not interactive. The screen on the back is now larger, at 2.25″. Battery life should be a maximum of 160 minutes recording in 1080p mode, but in 4K and with other features this will drop. DJI says that in 4K 60 the camera won’t overheat, being able to shoot within battery limits.

Read:  Up to 100 million Samsung phones, affected by a vulnerability that allows finding passwords and other sensitive data

The price is significantly lower

Like the new GoPro, the DJI Action 3 also comes with a battery that can withstand extreme temperatures (-20 – 45 degrees Celsius), and the battery is fast-charging and can be powered from 0 to 80% in 18 minutes. The remaining 20% takes 32 minutes. An upgrade over the GoPro, however, is the water resistance of up to 16 metres without an additional housing, suitable for diving. And the hydrophobic screens can be operated with wet fingers. The standard package includes the camera, external case, battery, an adhesive mount and magnetic holder, along with a screw and charging cable. There’s also an Adventure Combo with three batteries, a selfie stick, charger and two sets of magnetic screw mounts. Prices are €360 and €460 for the better-equipped package. Prices are significantly lower than the GoPro Hero 11 series.