So as many of you may recall from years past I like to take a little look at the A.L. Central during Spring Training and make my predictions.  These never come true, and usually make me look like I don't know what I am talking about.  But I figure if the PECOTA projections are still a thing after missing on pretty much everything last year, then why can't I?  So with that I unveil my first installment of the A.L. Central Preview for 2016. Last year the Chicago White Sox spent big in the offseason!  Much to the delight of Royals fans everywhere, this did pretty much nothing for their overall wins total.  By spending big on players like Jeff Smardzija they got in return exactly 3 more wins, and a spot in 4th place in the A.L. Central.  Management on the South Side took this and decided to retool their approach.  This season they instead went to the trade route.  In doing so they acquired Todd Frazier from Cininatti and probably the most fitting player for their team, Brett Lawrie from Oakland.  So what will this new approach mean for the pale hose?

The Pitching staff lead by Lefty powerhouse Chris Sale is going to be a solid again.  Follow that with Carlos Rondon, John Danks (Royal Killer), and Jose Quintana will make a strong 1-4 in the rotation.  Acquistion Mat Latos will be a strong candidate to take the 5th starters spot, shoring up a really strong rotation.  Sale was about three bad starts away from a Cy Young last season, and Rondon is looking to emerge as a primer starter in the Central.

The Middle of the White Sox line-up will have as much punch as any in the A.L. this year with newcomer Todd Frasier at third, and "mini-Miggy" Avasial Garcia, protecting Jose Abreu.  Abreu is a one man recking crew, but was pitched around a lot last season.  With the addition of Frasier and Garcia being a year older will only help bolster his success.   All said this line-up has the potential to score a lot more runs.

The Sox attempted to beef up the bullpen a bit this offseason and added a few pieces around their big name signing from last season David Robertson.  Robertson was touted as a big piece to the puzzle, but ended up leading the league in blown saves (7) and homeruns by a closer (7).  This is still an area of weakness for the Sox, but additions like Nate Jones and his 100+ mph fastball should help a bit.

Catcher is another area where the Sox decided to retool.  The last few years saw Tyler Flowers hit seemingly one RBI (a walk off winner against the Royals) and Giovanny Soto twinkle out as a major leaguer.  Neither player was re-signed, and the White Sox instead brought in Central foe Alex Avila from his father's team, the Tigers.  Avila is not quite the player he was in years past, but is still an upgrade from what the Sox were working with.

Alexis Ramirez has finally been pulled from the side of the AL Central.  This thorn gave me nightmares.  He seemed to find his way on base in every inning, and make plays that he could never muster against other teams.  Ramirez moved to San Diego, and the White Sox are still trying to figure out who will replace him in Chicago.  Tyler Saladino may be the frontrunner as camp begins, but it is certainly not going to be Brett Lawire.  He will instead be wandering around aimelessly at 2nd.

DH was a black hole last season on the South Side. Adam LaRoche was brought in last season for his power, and onbase potential.  But that was all for not.  Instead he regressed in most offensive categories, and devolved into a weird beard with a bat. He was essentially Adam Dunn without the power.  And guess what, he is back!  His $15 mil. price tag was too hefty to dump, so he will once again be clogging up the middle of the line-up.

Management is finally on the hot seat (even though I thought they were on their way out last season).  Former fan favorite Robin Ventura has helmed the White Sox to back-to-back-to-back losing seasons.  I have seen numerous sites calling for Ventura's job, and I think the added pressure of the North Siders finally getting back to form will force ownerships hand, and Ventura will be out mid summer unless the Sox find a way to win a few games.

This team will yet again underachieve. The chemistry piece doesn't seem to get any better with cancers like Brett Lawrie in the clubhouse.  I do think the Rotation will win a few more games than the team should, but the Offense and Defensive short comings will put them at 76-86.  Manager Robin Ventura is about a 4 game loosing streak from getting booted harder than he did by Nolan Ryan.  And the team as a whole is about one more Adam Eaton racist text away from implosion as well. The Sox may have dumped some cash but remain of little threat to the Boys in Blue. 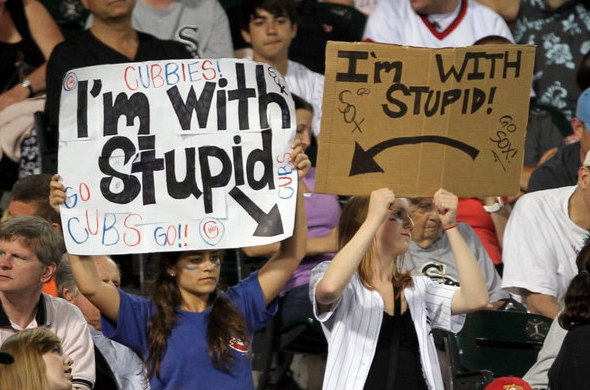 Making of a Dynasty: Can the Royals become one?

The Royals have won back-to-back American League Pennants and a World Series.  Can they add to this chapter in history and be remembered as one of Major League Basesball’s all-time dynasties? The 2015 Kansas City Royals what only three teams had done since the turn ... Read more

The Royals Have Options After Dyson's Injury

Update: It has been released that Dyson has a grade 2 oblique strain and will be out up to 6 weeks, including rehab time. This means he will most likely begin the season on the 15 day DL.  It seems that every spring, injuries ... Read more

This message is only visible to admins.

Error: An access token is required to request this resource.
Type: OAuthException
Solution: See here for how to solve this error